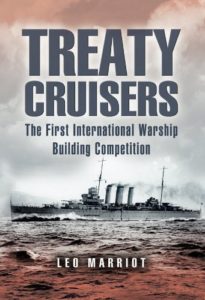 This is a paperback edition of a book first published in 2005. The book has stood the test of time and is still the finest book covering the Washington Navy Treaty Cruisers. These cruisers, built during the 1920s and 1930s by the United States, Britain, France, Japan, Italy, and Germany, were the ships that fought the naval gunnery battles during the first years of World War II.

The author starts his book with the story of the Washington Naval Conference. He presents how the diplomats arrived at the total tonnage cap each nation could build to in cruisers and the maximum size and gunfire a cruiser could be designed to: 10,000 tons and 8-inch guns. Then the author looks at how each of the five signatory nations, plus Germany, used these tonnage and armament parameters to design and build their Navy’s cruiser force. Each of these six nations faced different strategic needs, economic realities, and political will. Japan and the United States faced each other across the broad Pacific Ocean. France and Italy had vulnerable colonies on the southern shore of the Mediterranean Sea. Britain faced enemies close by and on the other side of the world. Germany sought to dominate the Baltic Sea. Thus, the heart of the story centers around how each nation used its tonnage to build its interwar cruiser force. It is amazing to read the accounts of each country as to how their Navy came to its cruiser design conclusions. Each country seems to have emphasized a design feature of their cruisers that differed from other countries’ cruiser designs. These differences centered around ship size, gun armament, armor, speed, aircraft carried, and cruising radius. Each of these nation-based chapters is a stand-alone read.

The book closes with a look at how each country’s cruiser force fared during World War II. Examined in this section is cruiser warfare in the Atlantic, Mediterranean, Indian, Pacific, and Southwest Pacific. In reading this section, one is reminded that much of the fighting at sea during World War II involved ship-to-ship gun battles where a navy’s tactical doctrine often squandered the fighting value of the cruisers involved.

The author has crafted a book that is both a technical read and popular history. The book provides an excellent overview of the reasoning each country employed in building its interwar cruiser force and how they committed these ships to battle. If development of and employment of weapon systems is of interest to you, this is a must-read book.