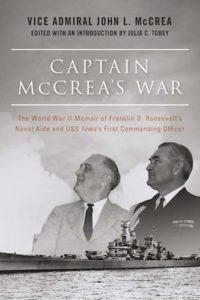 Using his own phrase, John L. McCrea was a fly on the wall at the White House during the first months of the War in the Pacific when naval affairs dominated Franklin Roosevelt’s interest. Working under Admiral Harold “Betty” Stark in the office of Chief of Naval Operations, McCrea had a front row seat as the U.S. entered the war. When Ernest J. King replaced Stark, he learned to adjust his behaviors to cope with the cold, hot-tempered, hardnosed, and pugnacious top admiral.

Captain McCrea desperately wanted a cruiser command, but Stark and King both felt he would be of greater use as naval aide to the President; furthermore, they wanted a trusted aide that could keep them informed of Roosevelt’s mind and who was influencing him. The loyal sailor quietly put his own desires aside for the good of the country, and was offered an unparalleled view of the inner workings of the White House.

FDR’s Chief of Staff, Major General Edwin (Pa) Watson instructed McCrea that he was to provide twice daily briefings of Naval Affairs, and quietly stand in the corner while discussions took place among the President, Secretary of Navy Frank Knox, Pa Watson, and others such as Harry Hopkins and the President’s wife, Eleanor.

With speed and a modicum of trepidation the Captain found himself to be the only person with immediate access to the Oval Office that was not of Flag rank. He rapidly learned what was essential for presidential attention and what was of lesser importance; however, he also identified Roosevelt’s sharply keen interest in certain ships or personnel that warranted FDR’s awareness. He often retained these bits of information or gossip for Sunday mornings while the valet dressed the President.

The Captain discovered an unused room and initiated the Map Room with large maps acquired from the Navy, Army and the National Geographic Society. This center, staffed daily, became one of the most crucial rooms during the war. FDR was tickled, and McCrea moved up a peg for his actions.

Effective and conscientious, McCrea quickly gained a personal and affectionate friendship with FDR who became more and more dependent on the 4-striper. McCrea recognized Roosevelt’s partiality for viewing sundry maps of wartime theaters. When the President went on a two-week train ride around America, he insisted that McCrea accompany him, and used the strong arm of the sailor to hold himself erect when stopping for speeches.

Roosevelt, understanding history and the Navy, recognized that despite his own dependency on McCrea, the Captain deserved a command. The President released him from duty and allowed him to be the first Commanding Officer of America’s biggest battleship, the USS Iowa upon which the former aide bombarded islands of Japan and eventually earned Task Force command in the North Pacific.

While this book may lack historical significance, it is important in understanding FDR, the wartime White House, and the events surrounding significant leaders of the era. McCrea did not keep a diary during his war years for security reasons; but immediately after his retirement he commenced creating an oral history. His stepdaughter organized the several dozen tapes and started editing them for this book. The “yarns”, as McCrea called them, are fascinating and fun to read.

One of his stories includes a meeting with notorious Admiral Ernest King. King told McCrea that he had the making of a good admiral but he wasn’t a son-of-a-bitch, and a good admiral had to be a SOB. The Captain, lying through his teeth and with a straight face, said that he had never heard anyone ever call King a SOB. King was so upset that he stormed out of the room slamming the door behind him.

Julia C. Tobey edited these stories with a sharp eye for interesting tidbits. Assisted by the highly lauded historian, Craig Symonds, Tobey crafted a wonderful book. Readers with a perspective on print size and fonts will find that Skyhorse Publishing issued a quality edition that is easy on the eye. Anyone with an interest in World War II will find this book well worth the $25, if for no other reason than for the “yarns”.