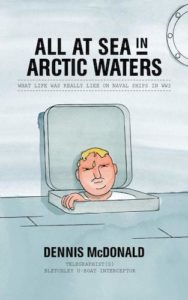 All at Sea in Arctic Waters: What Life Was Really Like On Naval Ships in WW2 by Dennis McDonald, “Telegraphist (S), Bletchley U-Boat Interceptor,” is both a memoir and autobiography of a young man who volunteered for the Royal Navy during World War II and chose telegraphy as his duty. During this war, the British had ca. 500 destroyers, including 50 coal-burning World War I United States ships obtained through Lend Lease, and perhaps more corvettes (p. 86). The adoption of the convoy system, whereby a cordon of frigates, destroyers and corvettes were tasked to protect merchantmen from U-boats which either acted separately or as part of wolf packs. McDonald was a crew member to a destroyer which was assigned to convoys between Halifax, Nova Scotia and Murmansk, Russia – the “Murmansk Run” through the North Atlantic and Arctic Oceans. World War II destroyers were about 2,000 tons with crews of between 200 and 250 men; the smaller corvettes had about 100 crewmen. Most of the crewmen were younger than 20 and officers often not much older. McDonald’s short memoir – 139 pages with 29 brief chapters – focuses on his experiences aboard a destroyer, HMS Zodiac, and everyday duties or chores and things that went wrong. The author doesn’t directly tell the reader, but this coal-burning destroyer was likely a Lend Lease vessel.

One of the reasons I chose to review this book was the subtitle about Bletchley Park and the fact that the author had specialized as a telegraphist whose duty involved intercepting shortwave radio messages from U-boats to their bases in Germany or Occupied Europe. The telegraphist’s task was to fix the enemy’s positions (location and distance) when the U-boat came close to the convoys’ vessels. The Allies used Huff-Duff (H/D H/F) or High Frequency Direction Finding while the Bletchley cryptographers who were working on material code named ULTRA (from its security classification), were most concerned with the type and content of the messages. They did provide U-boat radio transmission frequencies to the convoy escorts in order to conduct intercepts. These activities were invaluable in affording the Allies information about where the U-boats were meeting their mid-oceanic supply submarines.  In the spring of 1941, Alan Turing and the Hut 8 team made progress on deciphering the Dolphin Enigma key used by the U-boats attacking trans-Atlantic convoys. From then on, throughout the Battle of the Atlantic, they assisted the Admiralty to track the U-boat wolf packs, considerably reducing the Kriegsmarine’s ability to sink the merchant ships bringing vital supplies to Britain. However, on February 1, 1942 the Germans unexpectedly introduced a fourth rotor wheel to their U-boats’ Enigma enciphering machines, leaving Bletchley in the dark for the first time since the German naval code had been cracked. Within three months 273 merchant ships totaling 834,184 tons were lost, bringing the aggregate for the first quarter of that year to 1.93 million tons — 70% of them lost to Germany’s 121 operational U-boats, losses that could not be sustained. And, within six months, another 100 U-boats would be deployed. It took until December before the code was re-cracked.

A great deal has been written about Bletchley Park, a 19th century mansion and estate near Milton Keynes in Buckinghamshire, and the “codes and cyphers” school and its role the breaking of the Axis codes (particularly work on cracking Enigma, Naval Enigma, Italian Enigma, and Japanese Naval codes, among others). Actually, there has been relatively little published about the role of telegraphy in providing information to Bletchley. See the official reports by Francis Harry Hinsley et. al British Intelligence in the Second World War: Its Influence on Strategy and Operations, London: Her Majesties Stationery Office, 5 vols. in 6, 1st eds., 1979, 1981, 1984, 1988, 1990, and 1990); F. H. Hinsley and Alan Stripp Codebreakers: The Inside Story of Bletchley Park (New York: Oxford University Press, 1993 reprinted 2011); Andrew Hodges Alan Turing: The Enigma: The Book That Inspired the Film The Imitation Game – updated ed. (Princeton: Princeton University Press, 2015); Joel Greenberg Alastair Denniston: Code-Breaking from Room 40 to Berkeley Street and the Birth of GCHQ (Havertown: Frontline Books, 2017): and Michael Smith Station X: The Codebreakers of Bletchley Park, rev. and expanded ed. (London: Pan Books, 2017).

I won’t comment on the flawed motion pictures U-571 (2000), Enigma (2001), and The Imitation Game (2014) except to note that the daily Kriegsmarine weather reports were of great significance. However, some earlier books and films give some idea about convoys in the North Atlantic: Nicholas Monserrat The Cruel Sea (London: Cassel & Company, 1951; New York: Knopf, 1951) a highly successful novel that sold over four million copies in just two years and made into a film, The Cruel Sea (1953), starring Jack Hawkins, Donald Sinden, Denholm Elliott, and Stanley Baker. Commander Monserrat commanded a frigate in the Battle of the Atlantic, hence, there are accurate details I his novel; the Compass Rose was portrayed by the corvette HMS Coreopsis (K32). Another notable morale-boosting propaganda film, Action in the North Atlantic (1943), starred Raymond Massey and Humphrey Bogart as officers in the United States Merchant Marine aboard the freighter Seawitch in Convoy 211 on the Murmansk Run, which is attacked by a wolf pack; however, this film was shot entirely on Warner Brothers studio sound stages and back lots but used some combat film from Atlantic convoys. McDonald twice mentions Wolfgang Petersen’s film Das Boot (1981), starring Jürgen Prochnow, for its realism.  It is an adaptation of Lothar-Günther Buchheim’s 1973 German novel of the same name.

McDonald’s aim was not to deal with action well-documented elsewhere, but with the problems and issues experienced by the crew. He claims this book is unique and, after reading the entire volume, I believe he is correct – I don’t recall anything quite like this narrative – but there are probably hundreds of “my experiences during the war” books, often self-published or printed by vanity presses. However, Austin Macauley Publishers is not one of the latter and has done a splendid job in printing and binding this delightful book. The author saw the amusing side of to his service and it is reflected in the titles of the chapters (or yarns) in this book; as examples: “Getting Hooked” about finding a good location for your hammock; “Watertight Doors” that weren’t; “Ditching the Gash” in disposing waste water from dish washing – and not the cutlery and china; “All in the Drink” about ditching a sinking vessel (the word hypothermia was not used by the British); “Bath Night” details water conservation; etc.  The author provides a useful “Glossary of Naval Terms” (pp. 11-18) and rightly suggests that it be read first. Hence, the reader learns about “Buoy jumping” a difficult activity in choppy seas, “Jimmy the One,” the “Pusser,” and that “All at Sea” (as in the book’s title), means “in a mess.” He states that the greatest feat in wartime was finding a place to sleep (p. 103). When receiving training on shore in 1944-1945, there is interesting information about “Flying Bombs” (V-1), coordinated air defenses (rocket guns), warnings and actions taken at Royal Navy bases.

Material on telegraphy and Bletchley Park is scattered throughout the narrative but the reader learns about Enigma B-bar messages (-…-) that introduce a sighting report and weather reports began with WW repeated twice (.– .–), and that transmissions were scheduled five minutes before the hour, with frequencies changed constantly. Telegraphists learned the German bases’ call signs (Kiel was KPU) and vessel and convoy location plotting on a grid; the Atlantic and Arctic were divided into 500 x 500 km grid squares for tracking. To get an accurate fix on a U-boat required two escort vessels for triangulation. ASDIC — A(nti-)S(ubmarine) D(etection) I(nvestigation) C(ommittee), an early form of sonar developed at the end of World War I, was the primary underwater detection device used by Allied escorts throughout the war to detect U-boats at close quarters. The early versions were crude but further developed in the following years by the Royal Navy. The Germans had their own intercept system called B-deinst (B service).

Among other things one learns is signaling between ships at sea using Aldis lamps and by flags; the use of voice signal tubes; grammophone entertainment (due to gravity and rolling seas, the pickup stylus – needle – on 33 1/3 and 78 rpm records would jump out of its groove and skim across the record); “big” language barriers when Russians came aboard; and that when in Germany at the end of the war, normally unarmed Royal Navy personnel were issued and carried German Schmiesser submachine guns. The designation Telegraphist (S) signified Secret (pp. 133-134). The book’s “dedication” and portions of the final chapter are religious and anti-war with some Biblical references.

More than seventy years have passed since McDonald experienced the events he describes. What do we learn about telegraphy and the work for and with Bletchley Park?  Shortwave radio direction finding was a specialized task and, as noted, very little of it has ever been reported, but the book’s blurb states that it was closely related to the work at Bletchley Park – and claims “Here it is dealt with extensively.” Not so; dealt with only in passing, so we have a basic semi-autobiographical memoir that is fun to read.

Interestingly the Russians awarded their “Admiral’s Medal” to all naval personnel who made the Murmansk Run but, because of the advert of the Cold War, 68 years passed before the awards were actually bestowed. Not to be outdone, the British Admiralty awarded “The Arctic Star” to these men. McDonald does not report the fact that in July 2009 the British government announced that Bletchley personnel would be recognized with a “commemorative badge.” Thanks for your work, dedication, and keeping secrets.

All at Sea in Arctic Waters: What Life Was Really Like On Naval Ships in WW2
By Dennis McDonald, Austin Macauley Publishers, London. (2018).

Reviewed by Charles C. Kolb, Ph.D. Kolb is a Golden Life Member at the US Naval Institute, an independent scholar, and “accidental archaeologist.” He is the Associate Editor for Archaeological Ceramics at the Society for Archaeological Sciences and served as senior program officer at the National Endowment for the Humanities for 24 years.
Click here to buy All at Sea in Arctic Waters now!