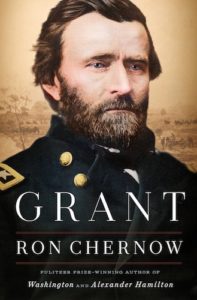 If you are expecting to deploy on a six to seven month cruise in the near future, Ron Chernow’s Grant would be a wonderful companion to pack in your seabag. Nearly 1,000 pages in length, the book will take some time to consume, however, the journey is well worth taking as the outcome is a better understanding of many of the issues we continue to confront in the present day.

In Grant, Chernow adds his vote to a growing chorus of military historians who rank Grant among history’s greatest generals. Back in 1988, John Keegan raised eyebrows when he profiled Grant in his Mask of Command survey of four “heroic” military leaders (his inclusion of Hitler raised even more eyebrows), citing Grant’s understanding of the broader strategic situation and the application and exploitation of recent advances in communications and transportation. Logistics – the ability to feed and care for an army as it surges further into enemy territory – is also paramount and Chernow details Grant’s earlier duties as a quartermaster to providing an essential schooling on this aspect of warfare.

Chernow also supports a growing consensus in the academic community that Reconstruction was not a tragic era as was once depicted in D.W. Griffith’s 1915 Birth of a Nation. Whereas Lincoln sought the end for slavery, it was Grant who argued for equal treatment for all “men” of color. Taking office in 1869, Chernow is effusive in praise for Grant taking Federal action to confront a growing KKK insurgency that threatened to initially negate many of the objectives of the Union victory. Tragically, as Chernow details, those objectives regarding civil rights for African Americans will eventually succumb to southern racism thanks to indifference and racist attitudes in the north.

From a naval perspective, Chernow depicts Grant as an effective joint warfighter who worked closely with his riverine commanders in the western campaigns in his initial efforts at Forts Henry and Donaldson and later in his successful effort at Vicksburg. With the nation looking westward, Chernows omission of the rapid decline of the U.S. Navy is likely attributed to the attention given to seapower within the Grant administration, especially after the Alabama claims were settled in 1872, an event that Chernow extols for its long-term significance in establishing a cooperation relationship with Great Britain that would facilitate America’s transformation into a world power. Ironically, the Navy gets more ink in the post-presidency as the Hayes Administration will authorize Vandalia to carry Grant to ports in Mediterranean during the former president’s two and a half year overseas odyssey around the world where he was adored by crowds in the hundreds of thousands and represented U.S. interests in meeting with national leaders and even brokered a territorial dispute between China and Japan.

However, why Grant is a subject worth study from a naval perspective is his ability to analyze the tactical situation on the field of battle and disseminate clear, crisp instructions to his subordinates and the ability to learn from his mistakes. Adherents to the “Lost Cause” favoring Robert E. Lee as the superior general, simply claim that Grant “the Butcher” triumphed thanks to the superior material and manpower resources at his disposal. However, Chernow points out that Grant’s predecessors also maintained such advantages. Grant understood the objective was not to capture the enemy’s capital but to defeat his army and thus engaged in maneuver warfare that ultimately led to Lee’s capitulation at Appomattox.

Of course, the story of how a former Army officer who served as a shop clerk at a family store in Gelena to rise to command all armies in the Union within four years is one of many rags to riches stories that serve to promote an “Only in America” exceptional belief system amongst the nation’s citizenry. Alcoholism and Grant’s lifelong struggle and ultimate triumph over this addiction is well covered as Chernow’s willingness to provide all accounts of each episode of inebriation is a factor in this biography’s extraordinary length. However, the flaw in Grant’s character that proves his undoing and plunge back to rags in the final years of his life is his naivety and gullibility. Chernow does place the Grant presidency in the context of the Guilded Age where robber barons bought legislators to do their bidding and patronage was used as a tool for party bosses to accumulate power and riches. Whereas Grant was impeccably honest, many of his appointees abused the public trust for individual profit, leading to case studies of public corruption that have overtones in present times. Ultimately a friendship between Ferdinand Ward and Ulysses Jr. “Buck” Grant drags the trusting father into the partnership of Ward and Grant which amounted to a ponzi scheme on a scale a century later emulated by Bernard Madoff.

Destitute, Grant turned over title to his New York City home and St. Louis farm to repay William H. Vanderbilt for a loan that was squandered in efforts to keep Ward and Grant afloat. Allowed to remain at his New York residence and eventually diagnosed with throat cancer, Grant, with the backing of Mark Twain, endeavors to write his memoirs. Completed just prior to his demise, the two volume Memoirs of U.S. Grant sell hundreds of thousands of copies and earned acclaim then and since as one of the best autobiographical works written by a president. Profits from the set allowed Grant’s faithful wife Julia to live in comfort in New York for her remaining years.

Recent debate to have our currency reflect the rich diversity of the nation initially focused on the ten dollar note. Thanks to Chernow’s earlier biographical treatment of Hamilton that was brilliantly adapted into a Broadway hip-hop musical by Lin Manuel Miranda, the first Secretary of the Treasury’s engraved image seems safe for decades to come. Given the new-found appreciation for the eighteenth president presented by Chernow, one suspects Grant’s image on the fifty dollar bill will also be secure for posterity.