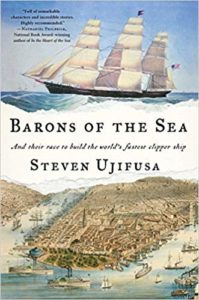 If you, as a young adult, were fascinated with Howard I. Chapelle’s book The Search for Speed Under Sail, you will enjoy Barons of the Sea. The focus of this book is examining the lives of some of the robber barons who built their fortune operating clipper ships. The term “clipper ship” still has the ability to fascinate and grab hold of anyone interested in early 19th century American maritime history. All of the great maritime paintings hanging in art galleries are of clipper ships under sail. While the story of the clipper ship has often been written about, little has been written about those who owned these ships and the cargos they carried. The author of this book corrects this absence of accounts concerning the ship owners and their relationship to the design of the clipper ship, the crewing of these ships, and their use in the China Opium and the California Goldfields Trade.

The author centers his story around three families: the Forbes, Grinnells, and Delanos. A descendant of the Delano family was Franklin Delano Roosevelt. These three families competed with each other to build the fastest clipper ship. In designing and building their ships, they used both time-tested methods and new innovations in ship design. The names of the ships they built still resound in the hearts of maritime historians: Stag Hound, Flying Fish, Sovereign of the Sea, Great Republic, Lightening, and Champion of the Seas. Central to the story of the development of the clipper ships is the genius of Donald McKay who designed some of the fastest clipper ships in the world.

The heart of this book is how these three families employed their clippers ships. First it was in the China illegal drug trade. Opium smuggled into China was the product that allowed Americans to purchase Chinese goods to sell on the American market. It was the swift sailing clipper ship that brought Chinese tea, spices, and silk to the United States.

Barons of the Sea: And Their Race to Build the World’s Fastest Clipper Ship
By Steven Ujifusa, Simon & Schuster, New York, NY. (2018).

Reviewed by Charles H. Bogart. Charles is a frequent contributor to the Naval History Book Reviews.
Click here to buy Barons of the Sea: And Their Race to Build the World’s Fastest Clipper Ship now!