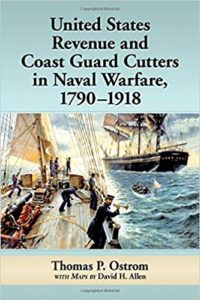 This book moves the reader through each major conflict of the newly formed United States, while highlighting individual ships and their captain’s contribution. Following an introduction on the establishment of the U.S. Revenue Marine in 1790, later called the U.S. Revenue Cutter Service, Ostrom’s book on naval warfare begins with the Quasi-War with France (1798-1800). USRC Pickering, which captured 15 French vessels, would be the most famous cutter from that conflict. Unfortunately, much of the first-hand account of the actions of USRC/USS Pickering were lost when the ship went down during a hurricane in the late summer of 1800. To Ostrom’s credit, he is meticulous in identifying secondary and tertiary references and citations that ensure the reader is provided with accurate historical information about the cutter and her crew. This attention to research and referencing is continued throughout the book and makes it an excellent facts-based resource.

Following the short chapter on the Quasi-War, the next four chapters focus on the War of 1812, or as the author refers to it as the “Second War for Independence.” An additional three chapters highlight multiple skirmishes (Pirates, Slaves and Seminole Indians; War with Mexico; The Antebellum Period) before arriving at the American Civil War. Three chapters examine both the Union and Confederate forces, while also discussing advancements in naval combat and ship design. Though the majority of cutters, captains and crews continued to serve with the North, some did pledge their allegiance and offer their ships to the Confederate States of America.  Even though the South did not establish a Revenue Cutter Service/Coast Guard, the author still details actions of their ships and those of senior naval leadership. A foretelling quote is provided by Ostrom from the 1864 “Army and Navy Journal” that hints toward the naming of the Coast Guard and its motto, Semper Paratus.

Following the Civil War, a chapter is devoted to Alaska and arctic operations before the Spanish-American War (1898). As the Great War (WWI) was raging in Europe, the U.S Revenue Cutter Service (USRCS) would merge with the U.S. Life-saving Service (USLSS) to form the United States Coast Guard (USCG) in 1915. The remaining two chapters discuss operations in World War I and a brief overview of the service. The epilogue briefly discusses USCGC Eagle, a 3-masted barque that serves as a training ship for the Coast Guard.

This book provides a concise documentation of facts on the Revenue Cutter Service and is written for the historian that appreciates extensive notes, quotations, and source documentation. Nearly all of the chapters are written to stand on their own and do not need to be read in sequence. This style proves helpful when researching a specific conflict and provides a concordance type feel for each of the wars. When reading the book from cover to cover; however, facts are often repeated with some sentences appearing the same as previously written.

Overall, learning about how the USRCS performed alongside the US Navy since its inception was very informative. There were numerous instances when the author could have provided more in-depth detail on specific battles, but that would have significantly increased the length of the work. This book should serve as a resource for anyone interested in military operations by the USRCS and be consulted as a compass that directs the reader in identifying the ships, captains, and engagements from 1790 to 1918.