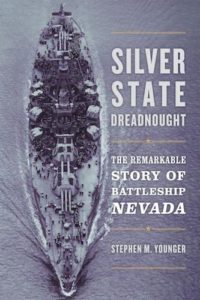 The author is the president of Sandia National Laboratories in Albuquerque, New Mexico which may explain why his next to last chapter, discussing Operation Crossroads, may have been his finest for his overview of the detonation of two atomic bombs and their impact on the subject of this book – the USS Nevada. That Nevada survives the two blasts carries forth an underlying theme that this warship was a survivor. Of course, Nevada was the only battleship to get underway that fateful day on December 7, 1941. Her sister ship, Oklahoma, capsized with heavy loss of life. Finally forced to beach after multiple bomb and torpedo hits, Nevada would be modernized to support the recapture of Japanese-held Aleutian Islands and the allied landings of Normandy and Southern France. Returning to the Pacific, Nevada was tasked to bombard Japanese positions on Iwo Jima and Okinawa and help defend against the Kamikaze scourge.

At the time of Pearl Harbor, Nevada was the Pacific Fleet’s most elderly battleship, having been placed in commission on March 11, 1916, ahead of all of the other battleships stationed on battleship row that day. With that seniority, the author argues that Nevada holds a special place in history as the world’s first super dreadnought. Younger boasts that following the Royal Navy’s leap forward in capital ship design with the commissioning of Dreadnought, the United States took the next step in the evolution of warships with the design and construction of Nevada based on the concept of “all or nothing” armor placement. By only protecting the vital engineering, magazines, gunnery spaces, and command and control positions with thick steel, the naval architects could design a faster more potent warship that featured two triple 14 inch turrets in addition to two dual 14 inch turrets.

Besides providing a narrative of the ship’s operational history during the two world wars and the years in between, Younger provides a series of mini-biographical studies of the many commanding officers of Nevada with the first – William Snowden Sims – perhaps being the most notable for his later career. Younger lauded Sims leadership style that included wandering about to informally chat with the crew. “Cheer up!” he would say and the “Cheer Up Ship” moniker would stay with Nevada long after Sims moved on the be the commander of U.S. naval forces in Europe and president of the Naval War College.

TheNevada bombed at Pearl Harbor had a different appearance than that of the ship Sims brought in commission thanks to a major refit in 1928-29 at the Norfolk Navy Yard that replaced the original cage masts with tripod fixtures and modified the turrets to allow the main batteries to fire at a higher angle. The radioactive Nevada that sank as a target ship off Hawaii on July 31, 1948, was even further different in appearance thanks to a major makeover at Puget Sound that improved her shore bombardment and anti-air capabilities.

Skillfully using primary source documents including deck logs and war diaries, Younger as written a very readable book about a special warship and the thousands of Sailors who served in her throughout her three decades of service.