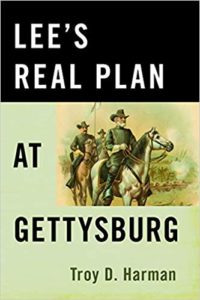 It’s arguable that there is more written about the battle of Gettysburg than any other event in US military history. The events of 1-3 July 1863 are well-chronicled, well-dramatized. The dramatic exploits at Devil’s Den, on Little Round Top, and the grand charge of Maj. Gen. George Pickett’s division have all received comprehensive coverage, some worth reading, and some not so much. So, it might stand to reason that there is little new or novel about the battle that hasn’t been covered before. Troy Harman’s work actually brings something new to the table.

Harman, a National Park Service ranger at the Gettysburg National Military Park, offers a different perspective on what Confederate General Robert E. Lee’s real plan was on those three fateful days in July. Harman contends that throughout the engagement, Lee’s objective never changed—that the central focus of Lee’s efforts was the capture and holding of Cemetery Hill.  Harman downplays the significance of the Round Tops on July 2nd, and he asserts that the target of the July 3rd charge was not some notional “copse of trees,” but was—as it was on July 1st and 2nd—Cemetery Hill (and, by extension, East Cemetery Hill). Harman states early in the book that “. . . the first reason that Lee desired to take Cemetery Hill throughout the remainder of the battle, was to finish what was started on July 1.” (p. 11)

Harman looks at the events of July 1-3 through two distinct lenses, which he labels the “ephemeral” and the “affirmed” view of the battle. The ephemeral perspective—what really happened—is hampered by the lack of first-hand accounts from significant role players on both sides (the lack of written records from characters such as James Kemper, Dick Garnett, Lew Armistead). What we are largely left with, Harman asserts, is the affirmed perspective—what we believe to have occurred after the event.

The author pulls from numerous first-hand accounts (soldier correspondence, unit histories, etc.) to support his contention that Cemetery Hill was the most important prize on the field. In his discussion of Longstreet’s attack on July 2nd, Harman argues that Lee largely dismissed Little Round Top’s military significance, and instead never wavered in his plan to have Longstreet’s corps sweep up the Emmitsburg Road towards Cemetery Hill. Harman also notes that an imperfect understanding of the Federal troop positions on the 2nd (specifically, not knowing who was on Cemetery Ridge) contributed to Lee’s decision proceed with his original plan.

Perhaps one of the most interesting vignettes of the book centers on the ill-fated Pickett-Pettigrew-Trimble charge. While Harman is not alone in his assertion that the glamorized “copse of trees” was not actually the intended convergence point on which Pickett’s forces were trained, he brings a new perspective to the tactics employed during the charge, and how those tactics support the assertion that Ziegler’s Grove (some 500 yards north of the copse) was the actual aim point. Specifically, Harman notes that the pattern of maneuver that Pickett employed was very similar to the sweeping maneuver that Hood’s Division used the day prior in the attempt to move up the Emmitsburg Road. Harman details Lee’s preference for the oblique maneuver, and notes that had Pickett’s right flank been “protected . . . as designed,” (p. 109) his forces would likely have flanked the Union left flank on Cemetery Ridge and rolled up the Federals on the way to Cemetery Hill. As Harman notes, the copse of trees just happened to be in the way (p. 111).

Lee’s Real Plan at Gettysburg is thoroughly researched, using first-hand references, unit histories, and the works of respected authors such as Glenn Tucker, Jeff Wert, George Stewart, and Harry Pfanz. Harman makes his case in a very readable, logical, and comprehensive way.  The author’s conviction for his argument is sure to generate conversation. Without a doubt, Harman’s work deserves a place on the bookshelf of any student of the battle of Gettysburg and the American Civil War.