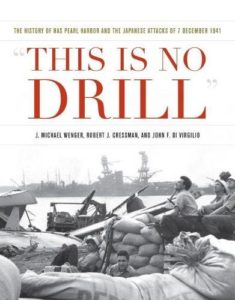 The tale of the 7 December attack on NAS Pearl Harbor is told through the use of first-hand accounts and excerpts from official reports. The authors’ craftsmanship in weaving these various accounts into a readable historic timeline is outstanding. The coupling of the written accounts to the book’s accompanying photos and drawings allows the reader to follow the flow of the story with a visual picture of where the event being reported is taking place. Particularly outstanding are the drawings of the seaplane hangars showing the location of each aircraft by type and squadron, the route each Japanese aircraft flew to hit NAS Pearl Harbor, and the explosive point of each Japanese bomb dropped on the hangers during the attack. This feature allows the reader to place individual events recorded by the authors within the attack and response phases. The overall story of NAS Pearl Harbor on 7 December 1941 is at first uncertainty, followed by chaos, and then a slow but progressive organized response by the sailors of NAS Pearl Harbor to mitigate the effects of the attack. The book closes with summaries of all the air search missions flown from Ford Island after the attack, seeking to locate the Japanese fleet.

Overall, the book is supported with an excellent collection of photos, some never before published, and a selection of maps and diagrams that allows one to visualize the events being reported. The Naval Institute Press deserves a Bravo Zulu for the quality of this book. The book This Is No Drill is an outstanding addition to the historiography of the Pearl Harbor attack.

This Is No Drill: The History of NAS Pearl Harbor and the Japanese Attack of 7 December 1941 By J Michael Wenger, Robert J. Cressman and John F. Di Virgilio. Naval Institute Press, Annapolis, MD, (2018).

Reviewed by Charles H. Bogart. Charles is a frequent contributor to NHBR.

Buy This is No Drill: The History of NAS Pearl Harbor and the Japanese Attacks of 7 December 1941 now!