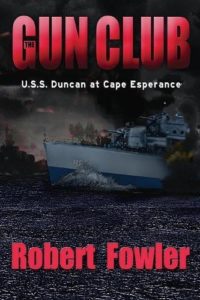 For two months after its shocking defeat at the Battle of Savo Island, the USN conceded control by night of the waters around Guadalcanal to the Japanese surface navy. But on October 11, 1942, Rear Adm. Norman Scott moved in his cruiser/destroyer force to challenge this control for the first time. Just before midnight, he surprised Adm. Goto’s “Tokyo Express” heading for a bombardment of Henderson Field, and killed Goto and sank the heavy cruiser Furutaka, in the slashing, bloody, chaotic and terrifyingly confused Battle of Cape Esperance: America’s first surface victory over the Japanese.

Robert Fowler’s father, Lt.(jg) Robert L. Fowler III, also lost his life there, and The Gun Club: USS Duncan at Cape Esperance is a labor of love over 25 years for the father he never knew and whose absence overshadowed his life. Lt. Fowler was a person of outstanding character and many gifts: a Harvard graduate, newly-married, and won the Navy Cross for his sacrifice. The Duncan, DD-485, was a newly commissioned member of the Livermore class, the best destroyers we had, that fought hard everywhere in the Atlantic and Pacific in 1942. This book is a tribute to both the process of turning the Duncan and her crew into a disciplined fighting ship, and its validation in the fiery battle in which she died.

The six months of nonstop land, air, and sea action for control of Guadalcanal may well represent the critical test of strength that determined the Pacific war, precluding all the other options that the Japanese considered might bring them victory after their failure at Midway – such as an offensive into the Indian Ocean or an invasion of Australia. But this was the Japanese navy’s finest hour, and the finest hour of “the Gun Club”, the American surface ship navy. Air power controlled the seas within its range by day, but it was blind at night; aircraft could hardly find large cities at night until the development of electronic aids. So, in WWII battleships, cruisers and destroyers often clashed at night in costly but decisive gun-and-torpedo actions for the control of narrow waters, at Narvik, Surigao Strait, Cape Matapan, the Murmansk convoys, as well as in “the Slot” running down the center of the Solomon Islands. The secret of the surface ships’ effectiveness lay in the word “night”. Modern warships were capable of taking each other under fairly accurate fire at extremely long ranges, but the percentage of hits was very small, leading to long but indecisive gun duels with a huge expenditure of ammunition for small results, like the Battle of the Komandorskis. But at night ships ambushed or blundered into each other at point blank ranges where their flat-trajectory gunfire became accurate and devastating – if they could acquire a target and identify it an enemy. The problem was tactical – how to win? How to deceive, find, surprise the enemy and control your own force during the sudden, brief, confused actions that resulted? A commander who let such a brush devolve into a melee faced total loss of control of his own ships and momentary success left him with the question – what to do next? This describes both sides at Cape Esperance, with the USN winning because it was only less confused, made less mistakes, and was barely able to keep the initiative.

The Gun Club gives a brief, clear summary of the battle, based, according to the author, largely on Capt. Charles Cook’s excellent The Battle of Cape Esperance (1968). He gets few facts wrong (he calls the SOC floatplanes “Kingfishers”) but leaves some important things out – notably any reference to the Japanese viewpoint, in particular the fact that Scott caught them asleep in spite of their vaunted night combat skills. He is critical of Scott, but without ever suggesting tactical alternatives, except the familiar one that he should have commanded from a cruiser with SG radar. One technical detail I can’t help myself mentioning – though I admit it falls outside the scope of the book – is the fact that the Brooklyn-class Boise’s armor resisted penetration by Japanese 8” shell hits at close range, but she was nearly destroyed by an 8” flat-nosed “diving shell” that penetrated her magazine BELOW her belt armor. This caused a devastating fire but not the devastating explosion that should have resulted.

But where this book shines is its recreation of the experience of the men who were there. Fowler quotes Marechal Saxe, “The human heart is the starting point of all matters relating to war,” and the focus of the book is the men of the Duncan; a fascinating, richly human recreation of a WWII destroyer’s story – her completion, commissioning, shakedown, and journey to the South Pacific. It presents the detailed memories of many people with all their complexity and contradictions, particularly between officers and men. The crew may well appreciate – after the fact – being turned into a disciplined fighting unit, but find the process painful while the young officers are learning the art of leadership by trial and error. Fowler gives a very perceptive social and psychological look at the divisions in the crew: the career Navy enlisted sailors versus the better-educated high school grad new recruits, plus the aggressive trouble-makers and occasional criminals. Among the officers, there are the Annapolis grads versus the Ivy League pre-war reserve officers and the green wartime reserve officers mostly from Midwestern state colleges. Fowler lets them speak in their own words, so there’s little of that intellectual disease of history “presentism.” These are real “forties people” and this is their world — the world of Fowler’s parents and my parents.

The Duncan’s people compare their experience to The Caine Mutiny. But the Caine was a second-rate ship with second-rate leadership, while the Duncan was fresh and raw, but the best you’re going to get under those circumstances. Her weakness was inexperience; everything done aboard her in her nine months of life partook of an experiment which mostly – if far from completely – paid off when she faced the tests of battle, death, fire, and abandoning ship to face shark attack.

Up to this point this writer found “The Gun Club” to be outstanding, but its last section “The Aftermath” contains what I can only see as a very serious flaw. Fowler seems to have an intense personal animosity for LCDR Edmund Taylor, Duncan’s skipper, as well as, to some degree, for Norman Scott. He depicts them as having done nearly everything wrong during the battle, then attempting to cover this up in their after-action reports. He repeatedly accuses Taylor of cynical, self-serving dishonesty, yet offers no direct quotes or references to Taylor’s papers (which he consulted) or the words or papers of others to substantiate it. Instead, he indulges in what I can only call “mind-reading”; he tells us in detail what Taylor was “thinking” or “probably thinking” without external evidence.

To put it bluntly, this is simply bad history.  It is not permissible to blur the line between what is known and what is guessed. Fowler is certainly privileged to criticize Taylor, but not without labeling his conjectures clearly as such. Telling us explicitly how he arrived at his negative opinion of Taylor would help, too. Likewise, when he criticizes Taylor and Scott’s choices during the battle, it would be appropriate to give rational tactical alternatives for their actions.

The Gun Club offers many superb things, including fine writing, much psychological perception, and the recreation of the world of a destroyer at Guadalcanal. But thrown mud sticks. In an America thirsty for conspiracy theories and malicious innuendo, should you read it?  Well – it’s your call.

Reviewed by Robert P. Largess. Robert Largess is the author of “USS Albacore; Forerunner of the Future”, and articles on the USS Triton, SS United States, the origin of the towed sonar array, and the history of Lighter-Than-Air.