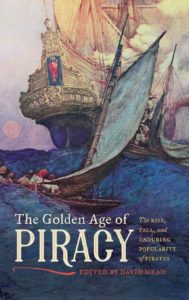 Long before Walt Disney invited guests at Disneyland to “sail with the wildest crew that ever sacked the Spanish Main,” piracy has been a topic that has fascinated people – with a rather odd juxtaposition. While no one would want to encounter a real pirate, the aura of the pirate has captured the imagination to the point that pirates have become a niche of popular culture. Equally the origins and implications of Caribbean pirates during the Golden Age continues to draw the attention of historians. David Head’s edited work, The Golden Age of Piracy: The Rise, Fall, and Enduring Popularity of Pirates examines not only the role of pirates in the emerging Atlantic World, but also explores the social and cultural impact pirate stories had on readers from the seventeenth through nineteenth centuries. As he notes, “This volume investigates the real pirates of history and the history of pirates in popular culture.”(2) Divided into four sections, the twelve essays that comprise this study take a fresh look at the origins of piracy during the European development of New World Empires, attempts to suppress piracy in the Atlantic from both colonial and metropolitan efforts, how lessons from historical piracy can be applied to the modern world, and finally to the developments of pirates in popular culture.

The first section – Pirates and Empire – opens with Carla Gardina Pestana’s essay which explores how Spain’s attempt to control access to the New World – particularly the Caribbean – fostered an environment for the growth of Atlantic piracy. Next, John A. Coakly’s essay focuses on the use of private seafarers by Jamaican governors to protect the island and conduct raids against the Spanish in the name of defense. Finally, Kevin P. McDonald explores the connection between logwood cutters along the Honduras coast and their involvement in piracy as Spain worked to control trade of this valuable commodity. These essays illustrate how piracy was universal classification for anyone operating unauthorized in the Spanish Main – whose acceptability changed along with the international relations.

From the origins of Atlantic piracy, the volume’s next section looks at efforts to end their activities in Suppression of Pirates. Douglas R. Burgess essay examines the evolution of piracy trials in England and its colonies. Efforts to eradicate Atlantic piracy through naval and other means is examined in David Wilson’s essay, showing how the suppression of piracy was a fragmented effort by various actors rather than a coordinated state effort. Finally, Guy Chet argues that the Atlantic world was always a violent environment, where piracy was not removed until the 1840s when conditions made commerce raiding unprofitable. Together, these essays argue that piracy was not eradicated in the 1720s as past accounts contend – and that it is important to read the historical records with the proper context for proper interpretation.

The third section – Modeling Piracy – contains two essays that take a novel approach to understanding piracy as a whole. Virginia W. Lunsford argues that by understanding the six key factors that allowed Caribbean piracy to flourish we can better confront modern day pirates. Peter T. Leeson looks at the historical period of piracy from an economic perspective. His analysis shows that many pirate actions (notably the Jolly Roger, use of torture, and pirate democracy) were efforts to improve the economic outcomes of their attacks. As such, the reader comes to see how many of the actions undertaken by pirates were critical to their success.

In the final section – Images of Pirates in their Own Time and Beyond – the authors explore how pirates were viewed in popular culture from the seventeenth through nineteenth centuries. Starting in the seventeenth century – Margarette Lincoln’s essay explores how the tale of Henry Every both established the pirate in popular literature and was used as a moral narrative. Next, Carolyn Eastman looks at how the masculinity of pirates was portrayed in the works of Alexandre Exquemelin and Charles Johnson – both very popular illustrated publications geared towards the middle to upper class men who could afford to purchase them. Matthew Taylor Raffety’s essay examines the use of pirate confessions in the United States Antebellum period to both provide sensationalized reading and morality stories. For many pirate confessionals – a woman (be it mother or lover) was seen as the root of cause of a man’s moral fall into piracy. Finally, Adam Fortner looks at how tales of buried treasure during the early Republic were laced with elements of the supernatural. In many cases, these tales were again used as moral lessons to promote the emerging capitalist mindset where one’s hard work is the source of personal wealth. As such, we see from their time on, pirates were a growing popular culture topic used by authors for entertainment and commenting on society.

The Golden Age of Piracy is a wonderful collection of essays exploring the connection of pirates to the overall Atlantic World, as well as their roots in popular culture. The authors provide the latest interpretations, which are nicely contextualized by Head’s editorial comments in the Introduction and Conclusion. Additionally, the work provides a valuable resource for those interested in going beyond the standard personalities who dominate the historical narrative of the period and delving into the circumstances of Empire building that allowed for the growth of Piracy in the New World. For a work of collected essays – it is consistently well written and accessible to historians, students, and casual readers. As such, anyone interested in piracy or the greater Atlantic world of the long Eighteen Century should consider adding this to their library.

The Golden Age of Piracy: The Rise, Fall, and Enduring Popularity of Pirates

Reviewed by JJ Ahern. Joseph-James Ahern is a senior archivist at the University Archives and Records Center, University of Pennsylvania.

Buy The Golden Age of Piracy: The Rise, Fall, and Enduring Popularity of Pirates now!