The Naval Historical Foundation saddened with the news of the passing of one of its Life Members – Admiral James “Ace” Lyons who departed this world on December 12th. 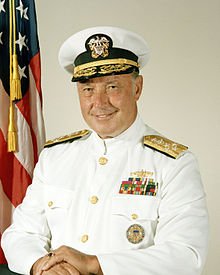 Asked to discuss his recently published Oceans Ventured, Winning the Cold War at Sea, (Norton, 2018) NHF Board Director and former Navy Secretary John F. Lehman praised Lyons as one of the architects of the Maritime Strategy that contributed to the demise of the Soviet Union. In his book Lehman wrote he first met Lyons in the 1970s when the future Navy Secretary was performing his naval reserve training with Attack Squadron 176 embarked on America stationed in the eastern Mediterranean. Meeting then Captain Lyons, Lehman reflected: “As we were both interested in strategy, we soon hit it off, and when off duty, we could often be found at a table in the wardroom talking strategy, operations, and tactics.”

With the election of President Ronald Reagan and Lehman’s selection as Secretary of the Navy, the U.S. Navy was provided marching orders to be more realistic and aggressive during its periodic fleet exercises. Lehman saw Ocean Venture 81’ “as a transformational strategic operation, not just a training event.” When Vice Admiral Lyons arrived to take command of Second Fleet, he recalled, “The first thing I did after taking command was to tear up the old Ocean Venture OPORD.”

Lyons used a number of deception decoys and tactics, integrated Air Force assets into the fleet movement, and welcomed the participation of allied navies. Lehman reflected that it was not until Lyon’s Second Fleet units had reached the Norwegian Sea that “the Soviets realized they had been snookered.” Ocean Venture 81’ sent the message to the Soviets that the U.S. Navy would be act offensively in its training regime during the Reagan presidency. With regards to Soviet ballistic missile submarine sanctuaries – there would be “no bastion for the Bear.”

The confrontational nature of the Cold War at sea came to a head in the aftermath of the September 1983 shootdown of KAL 007 west of Sakhalin Island. With recovery operations being conducted by the United States and Japan, Soviet naval vessels interfered resulting in protests and charges of violation of the 1972 US-USSR Incidents at Sea Agreement.

The following June US and Soviet delegations met in Moscow to review the events of the previous September. In their nation’s capital, the Soviets confronted Admiral Lyons has the head of the U.S. delegation. In my book Incidents At Sea (Naval Institute Press, 2017) I wrote: “Lyons had a reputation as a tough cookie.” His American interpreter went as far to say “He ate junior officers for breakfast.”

That persona impressed the Soviets and Rear Adm. Ronald Kurth would observe “In 1984, after KAL 007, the Soviet Navy went, by far, the extra mile…They handled their conduct in the Sea of Japan very openly, and we did, indeed, establish confidence.”

Well, as it turns out – not complete confidence. Secretary Lehman related an incident six months following the Moscow during the Christmas season where a stranger with a Russian accent arrived at the gate of the Washington Navy Yard to deliver a package to the residence of Vice Admiral Lyons. “A military bomb squad, called to investigate, saw an X-Ray picture of “two liquid-filled cannisters,” and the package was duly destroyed by a small explosive device. The remains disclosed that it had contained two bottles of premium Russian Vodka.”

Following his tour in the Pentagon, Lyons earned his fourth star and took command of the Pacific Fleet. Again he challenged his units to challenge the Soviets in waters contiguous to the coastal areas of Siberia. Such an aggressive posture, Secretary Lehman has since argued, contributed to the end of the Cold War. You will be remembered Admiral Lyons.