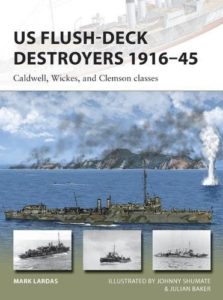 President Wilson kept the United States out of the war until 1917, which meant that the US Navy did not have enough escorts for the burgeoning wartime demands. As such, an ambitious construction plan to build the needed destroyers took shape, although delays and other challenges meant few of these vessels actually served in the war and in some cases did not join the Navy until 1922.

As with any design, certain shortcomings arose. The flush-deckers were not built to combat air or submarines threats, rather other surface vessels. One of the important shortcomings, the lack of anti-submarine and anti-aircraft weaponry, is not ignored by Lardas, “They were outdated before the final flush-deck destroyer was commissioned and obsolescent by 1939. When a new global conflict began, however, they were pressed into service filling gaps.” [5] Devised as torpedo and gun platforms, the existing flush-decker hulls gained new weaponry to meet the challenges of the 1940s with mixed results.

Lardas includes a range of interesting vignettes such as: the 1919 transatlantic flight of Navy Curtiss flying boats, which featured flush-deckers as guard vessels, the tragic Honda Point disaster of 1923 when seven Clemson-class destroyers in poor visibility ran aground off the California coast in the “worst peacetime loss in United States Navy history” [27] and the USS Greer incident with U-652 in September 1941. Also mentioned is the loss of the USS Reuben James (DD-245), the first American warship sunk in the war by German submarine U-552 while escorting convoy HX-156 as part of the prewar Neutrality Patrol. Some of the destroyers were ordered scrapped due to poor boilers and due to Washington Naval Treaty limits, one of them, USS Moody, was sold to MGM for use in the 1933 film Hell Below in which it was destroyed as part of the war drama dedicated to the submarine service.

The book features the typical cutaway which spans two pages, in this case the Asiatic Fleet’s USS John D. Edwards (DD-216) of the Clemson-class as it appeared in the 1920s. [24-25] Such images provide useful glimpses at not only the deck arrangements but also the below-decks machinery and other spaces. One of the color plates in the book shows Clemson-class destroyers in the 1942 Battle of Balikpapan, [36-37] a subject often ignored by the typical Pacific War retellings which favor events from Guadalcanal forward and minimize the bitter sacrifice of the sailors of the Asiatic Fleet who fought and died against the odds in the Philippines, Dutch East Indies and northern Australia. Eight of the thirteen “four-pipers” assigned to the Asiatic Fleet fell in the 1941-42 fighting, particularly around Java as part of the failed early Pacific War Allied coalition, ABDA.

These hardworking vessels served not only in the US Navy and US Coast Guard, but also in the navies of Great Britain, the Soviet Union, Canada, Holland and Norway. In particular, the British traded bases for fifty flush-deckers which helped to provide them with badly needed escorts renamed the Town-class. The British later use of the Wickes-class HMS Campbeltown as a “demolition ship” during the March 1942 St. Nazaire raid to deny the Germans use of the Normandie Dock is another highlight of the book.

One of the flush-deckers warrants particular attention, the Asiatic Fleet’s USS Stewart (DD-224). Stewart, badly damaged in a drydock in the Dutch East Indies in March 1942, gained the ignominious distinction as the only American destroyer to also serve in the Imperial Japanese Navy until repatriated in 1945 and expended as a target.

Mark Lardas’s US Flush-Deck Destroyers 1916-45 allows the reader a welcome overview of the WWI-era destroyer classes which most WWII books give scant attention for their lack of firepower and perceived obsolescence. Those interested in the sacrifice of the Asiatic Fleet will enjoy the book, as will anyone wanting to learn more about the development of the Caldwell, Wickes and Clemson class destroyers which saw action all over globe in a variety of roles.