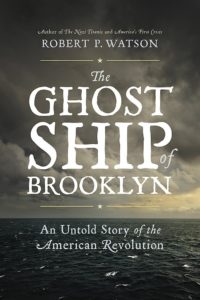 The Ghost Ship of Brooklyn: An Untold Story of the American Revolution
By Robert P. Watson, Da Capo Press, (2017).

Under dark and gray skies, the HMS Jersey sits ominously off the coast of Brooklyn in the calm waters of Wallabout Bay. The dilapidated ship is anchored, enclosing the horrors and trepidation of American Patriots who have dedicated their existence to serving their newly founded country in attempts to escape the tyranny of the British Monarchy. From the nearby shores of Long Island, one can hear the moans and screams of sick, starving, suffering men. To get though each day, the prisoners aboard can only pray for rescue by General Washington’s Continental Forces.

In the writing of The Ghost Ship of Brooklyn: An Untold Story of the American Revolution, Robert P. Watson attempts to capture the truth, only known by few, of the ghastly conditions experienced by privateers, Continental sailors, and other Patriots who were aboard the dreaded HMS Jersey.

During its tenure, the HMS Jersey became infamous, known as the “Hell Ship” because of the agonizing living conditions and the maltreatment of prisoners by the guards. Handpicked to oversee the prison ship, the notorious Commissary of Naval Prisoners, David Sprout, was known by prisoners to be ruthlessly vicious in his administration of the ship.

At Sprout’s hand, prisoners were routinely denied water, food, and medical attention while being frequently subjected to emotional torment and physical torture. The floating dungeon was known to imprison more than 1,000 men – more than five times the ship’s capacity. Aboard this hunk of rotting wood, prisoners were subject to yellow fever and smallpox. Of those who attempted escape, only few were successful. Many of those who tried were too feeble to swim away.

The account of the HMS Jersey is told through the eyes of five young men, between the ages of twelve and nineteen, who initially were serving as privateers during the American War for Independence. These boys composed the small population of prisoners who barely survived the Hell Ship. Each of these Patriots escaped the confines of the ship in different ways. Some were pressed into service under the British flag in His Majesty’s Royal Navy in the West Indies, while the loyalties of others led to being tormented on the ship for the duration of the war.

Through his well-researched and riveting narrative, Robert P. Watson is able to preserve the nearly forgotten tale of the Patriots who risked everything for their country. On each page, the shockingly gruesome scenes of the Hell Ship come to life. The stories of the five young Patriots must be shared and in doing so, the history of the Revolutionary War prison ships will be retained and the memories of more than 11,000 souls who perished aboard the Hell Ship Jersey will be memorialized.

Buy The Ghost Ship of Brooklyn: An Untold Story of the American Revolution now!