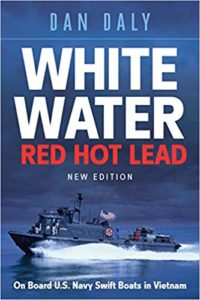 Approximately 3,500 men served in the Swift Boat units during the Vietnam War over a period of six years. Dan Daly’s excellent reminiscence detailed his nearly fifteen-month experience as a commander of Swift Boat PCF 76 that patrolled the waters from Chu Lai to Cua Viet along the DMZ from 1967-1968. Daly did not assume that the reader had experience with naval terminology and customs and as such, he provided welcomed explanations of social and military habits and traditions. His admiration for his crew of five and his positive relationships with other Swift Boat commanders was obvious.

PCF 76’s job was to patrol the coastline of Vietnam in a fifty-foot vessel made of aluminum with few structural safety features for the crew and boat. While Daly’s Swift Boat contained twin .50 caliber machine guns, M-16’s, M-79’s, an 81 mm mortar, and .38 caliber pistols, the crew needed to rely on their abilities to maneuver the vessel quickly, identify suspicious cargo junks, submarines, and assorted other craft, as well as make sure that they provided cover for U.S. Marines as they operated along the dunes and beaches of northeastern South Vietnam. Early in PCF 76’s days under Daly and his crew, they were told to check out the presence of a suspected enemy submarine during the middle of the night with no moon or stars to provide light. While not having natural lighting available to them is good as it protects the Swift Boat and her crew, it also nearly led to a friendly fire situation with the United States frogmen and submarine who were patrolling the waters at the same time, unbeknownst to Daly and even to those who directed Daly’s operations in the area. Fortunately, no harm came to any of the men or vessels. As Daly explains the incident, the reader is fully involved in what was to come next because he provides the necessary details of the operation. Throughout the book, Daly’s descriptions permit the reader to feel the shockwaves of the explosions on shore, as well as those at sea.

Likely without meaning to do so, Daly explains the importance of Mother Nature in his vessel’s activities in Vietnam. Describing overnight patrols during moonless and starless nights caused a lot of apprehension for the crew as that was the best time for the enemy, the North Vietnamese Army and the Chinese, to attempt a rendezvous with the Viet Cong. In addition, Daly and the other Swift Boats needed to proceed with great caution during their times at sea as they often sailed only several hundred yards away from the shoreline and potential enemy fire causing the Swift Boats to be pushed around by inbound and outbound wave action. Mother Nature showed her abilities to hamper operations for PCF 76 with her seas that sometimes were over ten feet high, as well as with high winds. Sadly, PCF 76 was flipped during such a storm causing Daly and his crew to swim for their lives. Happily, all were saved with little more than minor injuries, while the vessel suffered great damage.

Lieutenant Daly uses humor throughout to describe his crew, his friends, and his commanding officers. He had one nemesis, “Ball Cap Smithson,” who did not like the way Daly operated, but fortunately, Daly’s crew covered for PCF 76’s leader without any hesitation. Daly never said a negative thing about his crew, other PCF crews and officers, or anyone else in the United States Navy or Marine Corps. Even the incidents that involved Smithson brought humor, not a rebuke to the Commander, but it caused the reviewer to wonder if this is a feature of Daly’s memory or if the United States Navy was really perfect.

Several people in the book were composite characters, like Bob Mack, as Daly apparently wanted to give a brief explanation of various Swift Boat activities in and around An Thoi and Ha Tien, in very southern South Vietnam along the Cambodian border. While disappointing that Mack was a composite of several people, Daly also concealed the real identity of a nurse, Lt. Cdr. Katherine Hancock, with whom he seemingly fell in love. The reader would like to think he married Hancock, but it is unclear; or, perhaps their brief romance was part of the intensity of war and that the relationship might not survive peacetime.

Daly includes over seven dozen photographs, many of which appear to come from his own collection, adding to the descriptions that he provided his readers. White Water, Red Hot Lead is well worth reading and gave a positive, exciting, and often humorous look at a very capable United States Navy unit with highly trained and successful men.

Diana Ahmed is on the faculty of the Missouri University of Science and Technology.