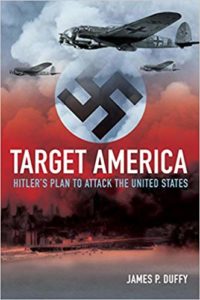 Over the past quarter century, James P. Duffy has written nearly two dozen books, mostly about military history with the majority of these focusing on the European Theater of World War II. He has also written about the American Civil War, the Czars of Imperial Russia (co-authored with Vincent L. Ricci), the John F. Kennedy assassination (1992), a volume entitled How to Earn a College Degree Without Going to College (1994), and Target Hitler: The Plots to Kill Adolf Hitler (New York: Enigma Books, 2011) by Duffy; and Ricci. A popular article he wrote for American Heritage (Fall 2017 www.americanheritage.com/users/james-p-duffy) derived from his recent book War at the End of the World: Douglas MacArthur and the Forgotten Fight For New Guinea, 1942-1945 (New York: Dutton Caliber, 2016). There is very little information available about Duffy’s background published in these books, or on the publishers’ websites, or the Internet, and why he has written so many popular histories. Readers will find only that: “He resides with his family in New Jersey.”

Nonetheless, these are well-written books that utilize basic sources and received generally very positive reviews. The paperback book sent for this review was published by The Lyons Press, Guilford Connecticut and is dated 2012. It appeared to be quite similar to 2004 edition published by Praeger Publishers. Target America has 11 chapters, 270 informative endnotes, a 123-item bibliography and 31 websites, plus a very useful, rather detailed eight-page index. Nearly all of the references are to full books rather than chapters or journal articles; only a few references were published as recently as 2000 and 2001 and nothing since. I had hoped that the author had, perhaps, mined materials that have been recently declassified in archives such as the US National Archives; however, this isn’t the case. So he has consulted well-known secondary rather than primary source material including military histories by Clay Blair, Michael Gannon, David Kahn, Samuel Elliot Morison, and Norman Polmar and Thomas Allen, as well as familiar books on Hitler by Michael Burleigh, Donald Kagan, William Shirer, Albert Speer, John Toland, and Hugh Trevor-Roper, among others.

Duffy refers to a controversial book written by Patrick Buchannan, A Republic, Not an Empire (Washington, DC: Regnery, 1999) in which he discussed the issue of how close Nazi Germany came to launching a meaningful attack on the United States. Buchannan noted that Hitler indeed had plans to assault the US and that, during the war, Americans feared bomber and missile attack. (Your reviewer also recalls this when, as a child, he lived in a major industrial city on the Great Lakes during World War II.) Buchannan’s publication set Duffy to work on Target America.

The initial chapters, “Before there was a Hitler” and “Adolph Hitler, America and the World,” provide scant information on German military planning since 1897, the Spanish-American War, German colonies in the Pacific, the Great War, and Hitler’s perception of America as Germany’s greatest rival. Duffy contends that Hitler underestimated America, noting that there is little about America in Mein Kampf (1925) but the United States was a focus in Hitler’s Zweites Buch (written in 1928 but not published until 1961); a summary of the main points of that volume would have been useful instead of Hitler “predicted a future war with the United States” (pp. 12-13). The long-term goal was that he would become “Fuhrer of the world,” hence a declaration of war against the United States on December 11, 1941.

A group of chapters center on Luftwaffe plans, “Tasks for Long-range Aircraft,” prepared by Dietrich Schwenke in April-May 1942, for long-range bombers to attack the United States. Duffy had access to a photocopy of copy #5 (of ten copies) that specified aircraft ranges and payloads, potential targets, and diagrams of bombers (FW 200, FW 300, He 111, He 177, Bv 222, Bv 238, Ju 290, Me 264, and Do 214) – some of which is illustrated by Duffy, who also cites a David Kahn interview of Schwenke in 1973. One chapter concentrates on the race to design and build four- and six-engine long-range bombers by Dornier and Junkers, the test flight of Me 264, and Project 1061 (a trans-Atlantic bombing campaign). Duffy also recounts the efforts and failures of Ju 390, He 277B, FW Ta 400, and Ho 18 — the latter a six turbojet flying wing designed in February 1945. Duffy provides a great deal of information in these chapters, but the ultimate result is that Germany never built an “American bomber.”

“Chapter 5: Rockets, Missiles, and the Nazi ICBM” documents the successes Germany has with guided missiles including the FZG 76 propelled by a pulse-jet engine (Hitler called it the V-1 while the British dubbed it “Buzz Bomb” and “Doodlebug”). The roles of Walter Dornberger and Wernher von Braun in developing and testing the V-1 in the Baltic and Peenemünde West are recounted. After June 1944, when it became operational using a 150-ft. launch ramp, 10,000 V-1s were built and launched against England and the Allies. Based on the German design and components recovered from crash sites, American engineers developed the JB-2 (Jet Bomb-2) planned for use against Japan, and a naval version, KUW-1 Loon, launched from the submarine USS Cusk by February 1947, which quickly led to Regulus and eventually Tomahawk missiles and ultimately to Polaris, Poseidon, and Trident ballistic missiles. The V-2 oxygen and alcohol-propelled rocket A1 version flew first in 1933 with the A2 in 1934 and A3 in 1937. The most common A4 version (46-feet long, 28,440 lb. fueled with a1 1,654 lb. high-explosive warhead) was used against England – more than 5,000 were built by the end of the war. However, versions A9 (piloted) and A10 were designed to target American cities. Duffy comments on the conflict between Heinrich Himmler and Albert Speer over control of these rockets, the relocation of underground production facilities to Nordhausen and Ebensee in Austria and the construction of seven V-2 launch sites along the French Channel coast. Toward the end of the war, Major James P. Hammell was delegated to collect V-2 components in Austria before the Soviets took over – 340 rail cars of components were loaded and sent to Antwerp – be eventual foundation for the post-war American missile program.

In “Chapter 6: U-Boats to America,” Duffy records the conflict between William Donovan (OSS) and J. Edgar Hoover over American national security as Hitler in March 1941 ordered the Kreigsmarine to plan a submarine attack on an American fleet at anchor in a home port. Following Pearl Harbor, Japanese submarine I-17 shelled oil storage facilities near Santa Barbara Strait and in September 1942, a seaplane launched I-25 dropped incendiaries in the wooded Oregon interior. On the East Coast, U-Boats mined harbors from Boston to Jacksonville beginning in January 1942 as the highly successful Operation Drumbeat was initiated by Admiral Donitz (Duffy devotes only a page to this). In June Operation Pastorius, with U-202 landing English-speaking German saboteurs on Long Island and U-584 landing a similar contingent near Ponte Verde, Florida — both failed. Nonetheless, there were plans to tow, assemble, and launch V-2 missiles along the East Coast of America, and Operation Teardrop conceived plans for submerged U-Boats (U-511, 546, and 873) to fire rockets at American facilities in early 1945. In the subsequent chapter, “Target: New York City,” Duffy notes that this city is a symbol of the United States and discusses piggybacking a light-weight bomber under the wing of a larger craft, refueling via German long-range flying boat such as the Ju 390, and refueling in the Azores (Franco resisted this plan and did not join the Axis.) The critical lack of resources scuttled these ideas. Lastly, Eugen Albert Sanger developed an idea for a 100-ton “space bomber” or ramjet propelled bomber, the Silbervogel, for trans-Atlantic attack.

In “Invasion from the South,” Duffy recounts German plans for the conquest of Latin America via Fifty Columnists based in Brazil, Argentina, and Chile. However, Germany was never in a position to attempt actual military incursions in the Latin countries. Nonetheless, Brazil was pro-American and a partner to the Brazilian-American Defense Agreement but sufficiently valuable to the Axis that the United States already had drawn up plans for an invasion of northeastern Brazil. America remained concerned about the French and Dutch colonies in the Caribbean and the Vichy French fleet. Duffy might have fleshed out this chapter with Strategy, Security, and Spies: Mexico and the U.S. as Allies in World War II (Maria Emilia Paz; University Park, PA: The Pennsylvania State University Press, 1997); I remain dubious about some claims made in Hitler in Argentina (Harry Cooper (ed.); Hernando, FL: Sharkhunters International, 2014). In “Chapter 10: Italy Targets New York,” Duffy characterizes British “disasters” in the Mediterranean, November-December 1941: sinking of the carriers Ark Royal near Gibraltar and the carrier Argus; the battleships Barham and Malaya; and defeat of the heavy cruiser York near Crete (the latter by Italian motorboat torpedoes). These left two British battleships Valiant and Queen Elizabeth vulnerable and the Italians planned to use manned torpedoes against them; fortunately, they were not sunk. However, the success of manned torpedoes led to a plan to send such weapons against shipping in New York Harbor and up the Hudson. In the summer of 1943, an Italian Cant Z.511 hydroplane with two CA-class midget submarines was sent to be refueled in the mid-Atlantic by Da Vinci, an ocean-going Italian submarine. The plan was thwarted when the Da Vinci was discovered and sunk with all hands in the Bay of Biscay, and by early September, Italy had signed an armistice with the Allies.

In the final chapter, the author considers why all of these efforts failed. He concludes that Nazi Germany’s “incomplete” air force, the Luftwaffe, never expanded beyond air support of ground troops in blitzkrieg attacks and had begun the war in 1939 with only about 4,000 front-line aircraft of all types. Secondly, he contends, that they squandered valuable resources because of an on-off relationship in long-term development and the actual implementation of plans because of Hitler’s ambivalence. They simply ran out of resources, manpower, and time.

This is a very interesting book in which the author coalesces a topic that is generally scattered throughout many other published sources, hence, it is valuable for this alone. The sources he cites are almost always secondhand from already published books and a few articles all published before 2001. The 1973 oral history interview by David Kahn of Luftwaffe Colonel-Engineer Dietrich Schwenke is from Kahn’s book Hitler’s Spies (New York, Macmillan and Company, 1978, p. 157). Hence, the book is basically a reprint of the Praeger edition of 2004 with no updates. The writing is a bit uneven, especially in the last one-third of the book. Duffy’s goal in writing the volume was to debunk Patrick Buchanan’s claims that the United States was never seriously threatened by Nazi Germany during World War II, but he is unsuccessful. While the production of long-range bombers proved infeasible, Nazi plans for a series of offensives using the newly developed long-range V-2 weapons emerged from wartime research. Axis schemes to attack American cities through the use of multi-stage missiles, submarine launched rockets, and suicide missions against ships in the New York harbor suggest how determined the Axis was to attack the United States. Nonetheless, Americans were concerned that the Germans had developed long-range weapons for use against industrial and political targets in the United States. While Duffy makes a case for the improbability of Axis attacks by air or sea, Americans contended that such attacks were possible – a foreboding that carried into the Cold War period. Given material, manpower, sufficient time, and changing the results of a handful of land and naval engagements in favor of Germany – a different post-war world might have emerged.