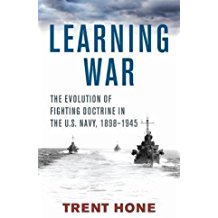 Admiral John Harvey always opened talks with naval audiences by stacking a small pile of recently published books on the podium and urging his listeners to acquire and read them for the various insights that enhanced our understanding of the profession. If Harvey were still on active duty, no doubt he would gush on Trent Hone’s Learning War.

Unlike post-World War II where declassification issues still stymie naval historical scholarship, the pre-war era extending back before the turn of the 20th century is enjoying a renaissance thanks to the efforts of a new wave of naval historians such as B.J. Armstrong, C.C. Felker, Jerry Hendrix, David Kohnen, John Kuehn, Scott Mobley, Albert Nofi, Chris Rentfrow, and Timothy Wolters. Trent Hone, with Learning War, has interwoven much of the work of the aforementioned scholars with several previous studies he has written to provide an understanding of the evolution of the naval officer corps and the learning process critical to success in the Pacific in World War II.

This study is a remarkable accomplishment for a former religion and archeology student from Carlton College in Minnesota. It helps that “Pops” is Tom Hone, who once gave the inaugural David Leighton Lecture at the Naval Historical Foundation’s annual meeting with a talk on battleship gunnery exercises in the 1930s. The two have collaborated on previous publications and the younger Hone’s zeal and analytic abilities regarding naval history clearly matches that of his father’s.

Hone leaned on the writings of Jon Tetsuro Sumida to explain and embrace Alfred Thayer Mahan as the mastermind of the makeover of the naval officer corps. Hone connects the dots from Mahan to a cadre of officers who served during World War I who brought along junior officers who would command fleets during World War II.

It must be said Learning War is not comprehensive. Naval aviators and submariners may feel put off by a narrative that uses surface gunnery as the vehicle to explain the evolution in naval doctrine. Naval warfare in the Atlantic against the German U-Boat threat is not addressed. Hone focuses instead on the Pacific where the enemy had a surface fleet to contest. Hone shares the view proscribed by a growing number of historians, such as James Hornfischer, that Midway was not a decisive turning point. Rather it was the campaign for Guadalcanal, which involved a number of nighttime surface actions culminating with the two-part Naval Battle for Guadalcanal in mid-November 1942 that truly changed the direction of the war. In his analysis of the action on the early morning of November 13, Hone shares an admiration that Director of Naval History Rear Adm. Sam Cox recently expressed in a posting about the aggressiveness of Rear Adm. Daniel Callaghan to take on a Japanese formation that included two battleships. Hone argues that pre-war studies may have informed Callaghan that cruisers could have success against Japanese battlewagons within a range of 10,000 yards.

Hone’s focus on putting bullets on target ties the chapters together and discusses the need for improved situational awareness that led to the creation of the Combat Information Center. Hone is laudatory of Admiral Nimitz who seizes on the importance of such information gathering nodes but allows his commanders latitude in how they are to be installed. The pre-war culture of learning carries on into 1943 as the navy scores a number of surface victories in actions in the Southwest Pacific. Hone points to the publication of PAC-10 (Current Tactical Orders and Doctrine Pacific Fleet, 1943) as the playbook that enables the fleet to easily interchange units and fight effectively, something that was found lacking in late 1942. Ironically, with the standardization of tactics and doctrine to accommodate a growing influx of new ships and personnel, Hone laments that the learning process that had been the hallmark of the American Navy over the previous half century, will slow to a halt by war’s end.

Hone’s methodology sets a standard worth replicating for future doctrinal studies that could look at anti-air or anti-submarine warfare. Given the swarth of history covered and Hone’s conclusion that the United States Navy was ahead of its time in its ability to absorb knowledge and put critical lessons learned to practical use, Learning War should be considered for classroom use at academic institutions that offer coursework on naval warfare.

Dr. Winkler is a historian with the Naval Historical Foundation.
Buy Learning War: The Evolution of Fighting Doctrine in the U.S. Navy, 1898–1945 now!