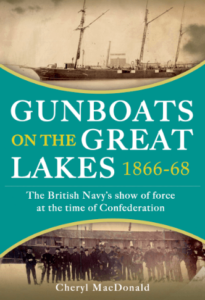 Gunboats on the Great Lakes 1866-68, The British Navy’s show of force at the time of Confederation
By Cheryl MacDonald, James Lorimer and Company, Toronto, (2017).

Gunboats of the Great Lakes is a “what if” book; and the “if” is directly connected to the untimely death of the author, Cheryl MacDonald.

As interesting as the subject is — Canadians demanding the Royal Navy come to their defense on the North American inland seas to hold back the Fenians, Irish nationalists, many of them Union Army veterans and operating from the United States, much of the larger context of how these waters became so contested in the 1860s is missing.

Sadly, so is the follow-on as to what became of the Tars when their service in Canada ended. Having said that as notes of caution, MacDonald, well-known as a local historian in Canada, left enough of a story about Britomart, Cherub and Heron, the turmoil in Canada that the Fenian invasion caused, and the steady fears these British subjects harbored ever since the American Revolution that their neighbors to the south coveted their part of the continent as much as they lusted for Mexican lands from Texas to the Pacific to make this worthwhile for readers interested in North American maritime history.

It is an abbreviated “time well spent” on a subject that receives scant attention in the United States: How our northern neighbor came to be and what we threatened that shaped that response.

MacDonald does a wonderful job of setting the stage on the Canadian side of the border not only for the Fenians to do battle with Canadian militia near War of 1812 combat sites, but also the sounding of alarm bells from Quebec to Hamilton to be on the alert for the Americans following the seizure of the British mail packet Trent in the Caribbean.

What MacDonald’s posthumous work didn’t include in any detail was how the Union in the American Civil War, tired of Confederates operating from Canadian sanctuaries against the North, including the seizure at gunpoint of two steamers in American waters and a wild bank robbing spree in Vermont, pushed aside the demilitarized treaty obligations on the Great Lakes to put more revenue cutters on these waters to back up its single heavy gunboat.

On this topic, this reviewer had to laugh to learn that George Denison, from a Loyalist family and diehard anti-United States, was charged with investigating the dubious performance of provincial militia to hold back the Fenians. Although he was from a line of militia officers in Canada and had written well-circulated and publicized pamphlets after the Trent affair to have the provincial parliaments put their money into modernizing their defense, Denison harbored Confederate saboteurs and spies at his suburban Toronto estate and actively sent them back to the United States as couriers and saboteurs. Most outrageously and publicly, he was the frontman for Richmond’s effort to buy a lumber carrier and convert it into a warship to attack Great Lakes cities.

Talk about putting the fox in charge of the hen house.
And oh yes, Denison later went on to become his province’s senior police official following the 1867 political union of the Confederation.

This work includes a very useful tutorial on the maritime landscape of lake commerce before the American Civil War. To understand how the gunboats from Great Britain, on station in Halifax, could reach such inland cities, MacDonald stresses and provides an important description of Canada’s canals. They made it possible to send shallow draft vessels from Lake Superior to Liverpool on the Atlantic coast of Great Britain or from Halifax to Thunder Bay.

The shortfall in Gunboats on what happened to the Royal Navy crews and greater details on the officers after their service in Canada would have been welcomed and is acknowledged. But MacDonald’s insights into desertion rates and absent-without-leave differences among the ships’ commands are very interesting and illustrate great disparities in command climate.

The shortfall is most noticeable in Chapter 7, but alas time she did not have in her struggle with cancer. The same need to provide more can be said about the provincial political pressure, particularly coming from what is now Ontario, that finally drove the patient Canadians from French-speaking Quebec City to the small villages west of the Huron Tract to throw up their hands over London’s seeming indifference to their very real concerns and immediate security needs. They finally said we can do this better ourselves and together — with the governor general’s knowing eye.

So in the end, did the gunboats make a difference in keeping the Fenians at bay?
Maybe.

But did their very presence reassure Canadians that if attacked again there would be an immediate response — not from its land or maritime militias, who may or may not have been ready?

MacDonald makes that case of reassurance very well. And probably deterrence as well. For its part, the United States also cracked down on the Fenians’ plots to spread terror across the border and force the issue of Ireland’s future.

John Grady is a veteran journalist and has conducted oral history work on behalf of the NHF.

Buy Gunboats on the Great Lakes 1866-68: The British Navy’s Show of Force at the Time of Confederation now!