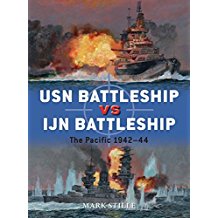 Mark Stille has succeeded in squeezing significant information into a limited number of pages.  Stille is a retired USN commander and a graduate of and former faculty member at the Naval War College. He has worked in the intelligence community for thirty-five years.  This prolific writer has penned forty Osprey Press titles, most dealing with naval history in the Pacific during World War II.  Over half of this eighty-page volume synthesizes information about several classes of USN and IJN battleships. The remainder focuses on the 1942 Second Naval Battle of Guadalcanal and the 1944 Battle of Surigao Strait. The author has turned his noteworthy talents into producing first-rate analyses of American and Japanese battleships and the admirals (Kondō, Nishimura, Lee, and Kinkaid) who commanded them.

Stille provides kernels of information not usually found elsewhere, and he does not mince words.   He indicates the Pacific Fleet battle line was not destroyed at Pearl Harbor. By June 1942, with the transfer of three New Mexico class battleships from the Atlantic, Task Force 1 included seven battleships. Stille considers the South Dakota class the best of those completed under the Washington Naval Treaty limitations. He notes Fuso emerged from her early 1930s modernization “as the ugliest ship in the IJN with her extremely ungainly pagoda style forward superstructure.”  (p. 20)  The Yamatos represented the IJN’s desire to attain a qualitative advantage over the numerically superior USN.  They were the only battleships to mount 18.1in/45 caliber guns, and the ships’ protection was unequalled.

Further, Rear Admiral Willis “Ching” Lee, a gunnery and radar expert, was a fortunate choice to command Task Force 64 on the night of 14-15 November 1942.  The USN’s victory at the Second Naval Battle of Guadalcanal was a very near thing.  The performance of ships using the Mk 3 fire-control radar was mixed.  Additionally, Japanese sailors were the best in the world at night fighting in 1942 by dint of their training and excellent optics, suggesting a precarious balance. In the hands of another admiral, defeat could have been snatched from the jaws of victory.  Stille also underscored how lucky Lee was that his battleships were not hit by the many excellent Japanese torpedoes fired at them. (pp. 72-75)

As for the Battle of Surigao Strait, two old IJN dreadnoughts and their escorts faced six veteran USN battleships and their supporting vessels.  Stille terms this, “more of a maritime execution than a battle.”  (p. 65) The Japanese were outnumbered, had their “T” crossed and faced more advanced technology.  The newer Mk 8 fire-control radar had a telling effect because the three USN battleships equipped with it were the first to fire and managed to get off more rounds.  The other three American dreadnoughts used the older Mk 3 radar.  They found the targets later and shot few, if any, salvos.

Stille considers it “remarkable” that IJN and USN battleships battled each other only twice in the almost four-year Pacific war.  (p. 77)  He concluded that with the exception of the Kongo class, the IJN dreadnoughts were underutilized until the end of the war.  While the newer USN battleships accompanied the fast carrier task forces because of their speed and anti-aircraft armament, the older dreadnoughts were used for naval gunfire support in amphibious invasions, where they were “unsurpassed”.  (p. 78)

USN Battleships vs IJN Battleships is chock full of pictures, illustrations, charts with technical specifications, schematics, orders of battle, maps, and a useful chronology; these enhance the narrative.  The writing is concise, cohesive and objective. However, there are a few areas worthy of comment. For example, Admiral William Halsey at Leyte Gulf in October 1944 is referred to as a Vice Admiral although he had received his fourth-star in 1942.  (p. 49)  Stille does well arbitrating between USN and IJN claims, reports, etc., though the lack of footnotes makes it difficult to determine precisely the sources of the author’s assertions.  Also, he points out the Yamato’s massive 18.1in guns were “inaccurate and the USN’s 16in/50 gun on the Iowa class was superior ballistically.”  (p. 38)  Elaboration and additional evidence would be helpful, since the muzzle velocities, according to charts on pp. 39 and 42, are almost identical. Though Lee credited American radar for his victory, and Stille asserts it provided “a huge advantage” (p. 44), the author goes back and forth.  He noted the Mk 3 radar was excellent in providing range, but there were limitations to firing by radar, and that “on several occasions during the Guadalcanal campaign, Japanese optics outperformed American electronics”.

(pp. 49, 56, 59, 72-74)  Finally, focusing on Vice Admiral Kinkaid, the 7th Fleet commander at the Battle of Surigao Strait, is an unusual choice since most histories spotlight Rear Admiral Jesse B. Oldendorf, the on-site battle line commander.

Stille has added yet another volume of substance to his lengthy list of publications and minor quibbles do not detract from this remarkable book.  Battleship buffs, academics, and naval officers will benefit from learning more about the utilization of capital ships of yore and how and why nations devote precious resources to selected weapons systems.