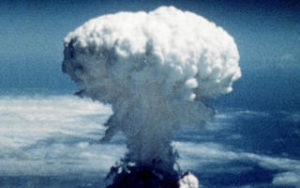 There are several conclusions that one can reach as this well-conceived series concludes.  Two are very important.  First, it was truly the “Greatest Generation” that won a brutal war and made the world a better place in which to live.  Second, and perhaps more closely tied to what we have previously viewed, is that movies are unable to convey to the viewer the real experience and horror of war.  You must be there to know and feel its full impact.

Let’s set the scene for the concluding segment.  As it opens, a ground invasion of Japan is imminent, but one bomb will change everything.  Massive air raids have torched Tokyo and other targets with war industries have been devastated.  Home movies taken by General Curtis LeMay, and his voice, show and tell of the damage.  Japanese movies depict children escaping from the bomb damage but not from their fears.  Voices of the U.S. pilots express pleasure that there is no opposition in the air.  The Japanese empire is gasping for breath.

In another theater of the war, movies show the Burma Road being bypassed by the newly constructed Ledo Road with supplies beginning to flow into China.  Home movies show the release of Japanese Americans from the internment camps in the western U.S.  Their voices tell the viewer that the fears which put them there were unjustified, but even so, other Americans fear their release.

Previous documentaries have told the story of development and initial use of the atomic bomb.  Much is repeated here except American and Japanese voices add a new dimension to this event.  Japanese voices and movies describe Hiroshima before and after the bomb is dropped.  It is traumatic to look at the footage of the horrible burns and wounds of the civilian survivors.

Emperor Hirohito announces the Japanese surrender to the nation.  The voices of those slated for the final assault convey their joy.  Footage of thousands of U.S. troops landing on Japanese soil and the defenses awaiting them had there been an invasion starkly show what was likely to happen if an invasion had taken place.  POWs, U.S. troops and Japanese troops begin the long journey home, the final act of the war for those who have survived it.  A new Japan begins to arise out of the rubble with the use of picks, shovels and bare hands and epitomized by General MacArthur’s home movies of a baseball game in occupied Japan.

This reviewer extends a warm BZ (bravo zulu is the U.S. Navy signal for well done) to the creators and all the others who worked on the production of this epic series.  New material and innovative use of the color footage and first-hand accounts of those who lived the experience set a high standard for succeeding works on the subject.