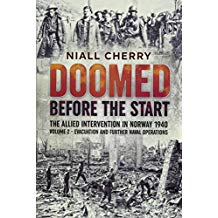 Doomed Before the Start: The Allied Intervention in Norway 1940 Volume 2 – Evacuation and Further Naval Operations

The final volume in Niall Cherry’s Norway 1940 campaign study, this cautionary work continues from the Narvik evacuation until the final departures. It benefits from a host of primary sources, particularly from the British National Archives, along with interviews, diary excerpts and select secondary sources. There are also a number of supporting photographs and maps, a war diary, and official history selections that are particularly interesting. In addition to the eight chapters in the narrative, there are also twenty-four supporting appendices, which provide additional information such as official reports, orders, and other useful documents.

Cherry served in the Royal Army Medical Corps (RAMC) before writing a number of military history titles such as Red Berets and Red Crosses: Story of the Medical Services in the 1st Airborne Division in World War Two (1999), Striking Back: Britain’s Airborne and Commando Raids 1940-1942 (2009), and Tunisian Tales: the 1st Parachute Brigade in North Africa 1942-43 (2011).

He brings considerable insight to the Norway 1940 story, balancing the political and military as he tells how the campaign wound down amid political considerations and naval operations conducted in support of actions ashore fought by a mix of troops including often poorly equipped and inadequately trained Territorial Army units. His combined arms scope covers not merely the land and naval operations but also the RAF, which struggled to check the Luftwaffe. While many readers are likely familiar with the May 1940 campaign in Western Europe, few know more than cursory details about the Norway campaign, which began in April but did not conclude until June 1940. This unfortunate intersection with the fight for France meant that the British and their allies in Norway, such as France and Poland, were competing with a much larger event, which curtailed the resources available and heavily influenced the abandonment of the isolated Scandinavian country to the enemy.

While much of the book deals with land actions related to the withdrawal, considerable effort addresses the naval operations related to the campaign’s conclusion. Of particular interest to the naval historian is the discussion of German naval operations conducted in Chapter 3 and the other withdrawal-related actions in Chapter 4. Chapter 3 discusses Operation Juno, which sought to strike against British supply efforts to Norway in June 1940. In the course of this operation the British aircraft carrier HMS Glorious and two destroyers, Ardent and Acasta broke off and eventually encountered the German battleships Gneisenau and Scharnhorst, which led to a deadly chase on June 8th and culminating in their destruction. During this costly action, the Acasta valiantly struck the Scharnhorst with a torpedo and caused substantial damage, which forced the ship to seek repairs. Later the Gneisenau sortied against the British again on June 20th, this time without the damaged Scharnhorst and ran into the submarine HMS Clyde that damaged the battleship with a torpedo.

As Cherry points out, the Norway campaign cost the Kriegsmarine dearly, especially in destroyers, and the damage suffered by the two battleships only added to the misery already inflicted. For Hitler, the eventual success in Norway overshadowed the sacrifice of the Kriegsmarine but the losses suffered would haunt the German efforts at sea for the rest of the war.

Cherry also discusses in detail the medical services in Chapter 6, providing a fascinating look at the methods and units by which the British provided medical attention and the difficulties they suffered in terms of equipment and operating in less than ideal conditions. It is from this same chapter that a salient quote from Private Keeble from the 189th Field Ambulance RAMC resonates, “all in all I felt the whole campaign was a fiasco.” [p. 152]

Cherry does nothing to dispel Keeble’s comment and if anything, he confirms it by the ample evidence provided throughout this book, which serves to illuminate the disappointing Allied results achieved from haphazard planning, slapdash management, and ample political myopia. While the personnel casualties are roughly even on both sides during the campaign, the Kriegsmarine’s high losses proved crippling for future campaigns and helped to shape the war’s outcome. For those interested in the obscure Norway 1940 campaign or World War II in general, there are worthwhile insights for all to enjoy in this revealing monograph.