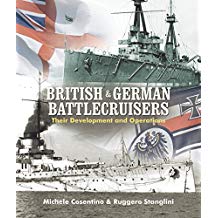 By Michele Cosentino and Ruggero Stanglini.

HMS Dreadnought and the Invincible-class battlecruisers transformed naval warfare when they were laid down in 1905 and 1906.  Dreadnought, the first all-big-gun battleship, made previous ships of the line obsolescent if not obsolete.  The Invincibles were the first battlecruisers, though this term did not come into official use until 1911. (p. 27) News of the latter’s commissioning set off a specific naval arms race between the two largest naval powers – Great Britain and Germany – which had major ramifications during World War I.  The new battlecruisers were a great leap forward in naval design.  Other naval powers were compelled to follow suit.

Michele Cosentino, a retired commodore in the Italian Navy and Ruggero Stanglini have written extensively on naval affairs. Since several books about battlecruisers already exist, is there a need for yet another?  Anticipating this, the authors’ goal was to merge elements found in separate books and provide a much more holistic assessment for an international audience.  British & German Battlecruisers is about “one of the most fascinating types of warships ever built.”  (p. 7) Cosentino and Stanglini incorporate historical, political, strategic, economic, industrial, technological and operational analyses into this first-rate account of these fast and powerful capital ships.

Battlecruisers were conceived as the strategic cavalry of the sea.  They were intended to fend off fast cruisers and had to be able to escape from more powerful battleships.  Warship design includes at least four main elements:  armor, armament, speed, and endurance/range.  Even without naval limitation treaties, there are upper limits on how much any of these elements can be increased within a given displacement.  The Royal Navy was popular in Britain, but spending on the military, in an era of increased pressure for social spending, was not.  (p. 45) Admiral of the Fleet Sir John “Jackie” Fisher was the father of the battlecruiser, and he favored speed over armor (protection).  Fisher also preferred “to have more battlecruisers sooner rather than fewer battleships later.” (p. 92) From 1905 until the end of WW I, Britain completed fourteen battlecruisers to Germany’s seven.  Even though Germany’s overall industrial production exceeded Britain’s by 1910, the Germans were never able to surpass British shipyard capacity in capital ship production.

Cosentino and Stanglini do an excellent job setting the stage with their introduction and first two chapters.  Background information about the British-German naval competition is presented.  In chapters three and four, the authors provide detailed comparisons of each nation’s battlecruiser classes.  The chapters are richly adorned with very helpful pictures, maps, line drawings, tables and charts which detail each ship’s general features.  These include design, construction, costs, protection, machinery, armament, service history, alterations, etc.  This consistent, cohesive, and comprehensive approach can become a bit tedious, but it is worth it for this wealth of information.  The authors clearly and plainly deal with such technical terms as stereoscopic vs. coincidence range finders, the Dumaresq, cavitation, the Admiralty Coefficient, etc.  Explanatory footnotes are very helpful.

WW I battlecruiser operations are evaluated and a technical and operational comparison is provided. There is an appendix with descriptions of other nations’ commissioned battlecruisers and those which died aborning or were converted to aircraft carriers as a result of the Washington Naval Treaty.

There were several battlecruiser operations during WW I, but the major test came at Jutland in 1916.  Three Royal Navy battlecruisers were sunk to the Kaiserliche Marine’s one, causing Vice Admiral David Beatty to lament, “There seems to be something wrong with our bloody ships today.”  Contrary to early perceptions, the British battlecruisers did not sink because of poor protection per se, rather, the primary causes were direct German gunfire and magazine explosions caused by poor ammunition storage and handling.  Later analysis indicated that even though only one German battlecruiser sank (Lützow), the Von der Tann, Seydlitz, and Derfflinger were heavily damaged.  (p. 218)

The authors conclude that battlecruisers lasted until WW II (most notably the Hood), but those sunk at Jutland caused the utility of the design to be questioned.  There is no mention of the controversial Alaska-class battlecruisers, often referred to as large cruisers.  Cosentino and Stanglini rate the German Derfflinger-class the best of those commissioned before 1918.  Overall, the battlecruisers completed the roles and missions for which they were envisioned and designed.  They were eventually replaced by the fast battleship concept best exemplified by the Iowa-class.

The authors effectively utilized the archives of both nations, and admirably succeeded in writing the “comprehensive and in-depth comparison of technical and operational choices made by the British and German navies.”  (pp. 7-8)

British & German Battlecruisers is on par with Dulin and Garzke’s and Norman Friedman’s battleship volumes.  It will take pride of place on capital ship buffs’ and serious scholars’ bookshelves.