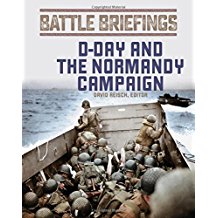 The historiography of the June 1944 Normandy Campaign, centering on the amphibious assault on 6 June, has been chronicled exhaustively in the literature of military history. Journalist and military historian David Reisch’s entry into the field, his second book within Stackpole Books “Battle Briefing” series, plows no new ground on the subject, but does provide a concise and readable overview of not only the actual invasion, as well as the preparations and the aftermath.  A quick read at 120 pages, the audience should not expect deep dives into any particular aspect of Operation OVERLORD, but will likely be pleased with a broad summary that touches of almost all of the facets of the Normandy campaign.

Divided into three sections, including the “Road to D-Day”, the actual invasion, and the ensuing campaign, Reisch aggregates basic timelines that allow less-informed audience members to understand the chronology of each phase, and briefly explains how those elements related to each other.  He also personalizes certain individuals, offering Medal of Honor citations and leadership biographies of those prominent personalities on which he wishes the reader to focus.  While these might seem a bit like cherry-picked hagiography to academic historians, the humanization of critical personalities to the intended audience is useful to readers without a background in the subject.

Again, and as acknowledged by the editor, there is little depth.  As one example, the pre-invasion deception plan, the editor gives one page to the topic (Operation FORTITUDE).  That operation alone merits over 1,700 pages in the three acknowledged, primary books on the subject.  Additionally, there are only two large-area charts to give readers a geographic touchstone, and those are at the end of the book.  That stipulated, the short length of the book makes the act of jumping back-and-forth between map and text a relatively simple proposition.

There are a few, minor shortcomings.  The selection of supporting photographs seems a bit random, such as the editor’s use of a photo of the post-attack damage at Pearl Harbor in an already-short book about the Normandy campaign, and the bibliography contains only twelve books, all of which are popular history and not academic examinations.  Those quibbles aside, the product is solid.  Largely jargon-free, this book is accessible to a wide array of potential readers, but the trade-off is that it does not fill any void in the collective understanding of the naval aspects surrounding D-Day.  At no time does Reisch try to make this something it is not.  It is a summary of an enormous, and critical, part of World War II.  Strongly recommended for non-specialists and students, it also offers to provide an invaluable resource for those preparing to visit the memorial in France, but who are not well-versed in the history of the war.