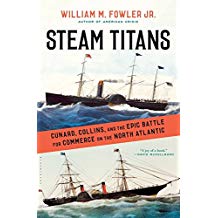 Steam Titans: Cunard, Collins and the Epic Battle for Commerce on the North Atlantic.

Dr. William Fowler, professor of history emeritus at Northeastern University, is primarily a naval and maritime historian. He is the author of Rebels under Sail: the American Navy in the Revolution; Jack Tars and Commodores: The American Navy, 1783-1815; and Under Two Flags: The Navy in the Civil War, among several others. In Steam Titans, he has provided us with a fine example of maritime history in the context of the transition from sail to steam. This well-written study provides good context in 19th century politics, economics, and the history of technology as applied to ships and shipping. He narrates a dynamic portrait of the exciting competition between American Edward K. Collins and Canadian Samuel Cunard, both entrepreneurs who began their businesses in coastal sailing packets. They entered the steam-ship transportation business in the aftermath of the Napoleonic Wars and the War of 1812. This account concentrates on the steam-and-sail driven, sidewheel packet era from the 1830s through the 1850s.

This competitive relationship between the Collins Line and the British and North American Royal Steam Navigation Company (later the Cunard Line) grew from two sources. First, the entrepreneurial drive to maximize profits in the new world of waterborne steam transportation in which both Britain and the United States had experimented during the late 18th and early 19th centuries.  A second motivation arose in Canada due to internal disturbances and disputes with the United States in the 1830s and 1840s. This led to a strongly felt need for swift, secure, and direct communications between Halifax and Liverpool, avoiding the pattern of British ships, passengers and cargoes stopping at New York before moving on to and from Halifax.

Using new sources, in addition to primary documents in the United States’, Canadian, and British National Archives, private archives, newspapers, and an excellent synthesis of secondary works, Professor Fowler’s new book gives fascinating insight into the owners’ personalities and family influence on the business practices of Edward Collins and Samuel Cunard. Collins’s ships, such as Atlantic, Pacific, and Arctic and the Cunard’s Britannia, Persia, and Scotia, that dominated trans-Atlantic commerce during the first half of the nineteenth century.  It is notable that both Collins and Cunard relied on naval subsidies to ensure prompt and secure deliveries of mail and to enable their steam and sail ships to make profitable voyages.  Furthermore, in 1850, the two companies established a secret price fixing agreement for minimum passenger and cargo rates, in effect colluding to maximize profits. The ships they built were the forerunners of the more famous ocean liners of the 20th century, namely Titanic, Lusitania, Mauretania, Queen Mary, Queen Elizabeth, and United States, among many others. The text features sixteen pages of fine illustrations, including ship art and portraits of the leading personalities.

For the technologically-minded reader, the text shows some appreciation of steam technology of the period, but it could have been strengthened by adding diagrams of the steam engines used in these early steam and sail vessels. In addition, vertical and horizontal cross-sections of a few ships’ hull plans might have been included. There are some instances of typographical errors, though these are infrequent.  At least one map of shipping routes on the North Atlantic would have been helpful. These matters aside, Steam Titans provides an informative, deeply researched, and well-written account of an important era in trans-Atlantic maritime history.