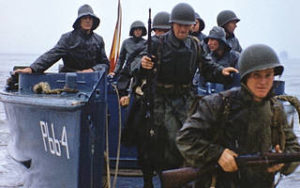 A bold new strategy, island hopping, unfolds in the Central Pacific theater.  Tarawa is chosen as the first large-scale amphibious assault with this untried strategy.  All participants have been trained, but few have been bloodied.  Rare color film footage takes the viewer behind the scenes as the strategy is developed and implemented, right up to the invasion and baptism under fire for most of the troops.

First person soundbites add a new dimension to combat footage, some of which has not been previously viewed. Tarawa is secured, but it is concluded that the first attempt at island hopping is a failure because not enough manpower was committed and much of the combat equipment wasn’t capable of carrying out its mission.  Combat footage released by President Roosevelt shocks the nation.  Dead marines litter the island bringing home the message that victory will not come easily.  These scenes remain startling today and are very difficult to watch.

Cutting away from the war the viewer sees a crossing the line (equator) ceremony when pollywogs become shellbacks.  These home movies show an ancient ceremony, considerably different than those watered-down versions of today, that offers a respite from the hectic combat scenes.  This diversion is an entertaining event to watch.

The next target on the revised island-hopping strategy is the Marshall Islands. Outstanding aerial photography places the viewer in the middle of the action.  At Kwajalein the landings come off without a hitch.  Never seen home movies show the troops relaxing and celebrating after the action’s conclusion.

New home movies show the early efforts to integrate women into the military.  Nurses arrive in the Central Pacific and receive a hearty welcome from the combat veterans.  Female pilots begin training and are soon flying aircraft behind the battle lines.

In the South Pacific theater, General McArthur is not enamored with island hopping and instead focuses on a strategy to isolate Japanese outposts.  Spectacular footage of low level raids on Rabaul as it is bypassed places the viewer in the middle of the action.

Finally, the capture of Eniwetok demonstrates that amphibious assaults have come of age.  The series moves on to the next episode with the promise that the ensuing step will be much bigger and travel a lot farther.