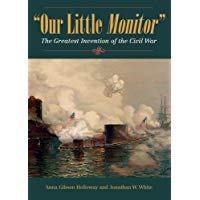 Our Little Monitor: The Greatest Invention of the Civil War

History is filled with pivotal moments in time when the tried and true is no longer sufficient and innovation both wins the day and points the way forward for the future. One such moment in naval history occurred in 1862 during the Battle of Hampton Roads. The ironclad warship CSS Virginia wreaked havoc upon Union ships on March 8, proving the superiority of iron over wooden hulls, and again on March 9 when the ironclad Monitor fought Virginia to a draw, changing both the future of naval architecture and naval warfare.

In Our Little Monitor, Holloway and White examine this moment and the effect it had on this nation and the world. They reprise the story of the Merrimack’s transformation from scuttled hull to the ironclad warship Virginia after Confederate forces captured Gosport Navy Yard in late April 1861. Virginia, with her casemate design of sloping armor to deflect shot and prevent penetration, made use of the principle of sloped sides much like today’s armored tanks and the stealth technology of cutting-edge planes and ships. However, it also boasted a very ancient feature in the ram mounted on her bow.

It was no secret that the Confederates were converting Merrimack into an ironclad. Secretary of the Navy Gideon Welles received this information from a number of spies, and subsequently sought proposals to build a Union ironclad to counter Virginia. Eventually the Navy selected naval architect John Ericsson to build its “Iron Clad Shot-Proof Steam Battery” using his proposed design and gave him a hundred days to do it.  Ericsson completed construction of his Monitor and delivered it to the U. S. Navy in February of 1862. With her deck riding low on the water, Monitor was almost a submarine . . . but with a rotating turret on top of it. Some later described it as a cheese box on a raft. There was no doubt that Ericsson’s design was unlike anything anyone had ever seen, and she arrived at Hampton Roads on the evening of March 8, 1862. Earlier that day Virginia had had her way with the Union Navy, sinking both Cumberland and Congress, and running aground and damaging Minnesota. The next morning, as Virginia headed back to Hampton Roads to finish Minnesota and continue the destruction of the previous day, Monitor came out to meet her and for four hours they dueled in the world’s first iron-clad engagement.

Holloway and White are careful to point out the primary significance of the events of March 8-9 lay not in which side prevailed. For the Confederacy, the immediate importance of the Battle of Hampton Roads was that they remained in control of the James River and in position to protect Richmond from attack. For the Union, Monitor’s timely appearance prevented further destruction of its ships at Hampton Roads and left the blockade intact. Unfortunately, both vessels would be lost by the end of 1862. On May 11, as Union forces advanced upon Norfolk, and with her draft too deep to retreat up river and questions about seaworthiness preventing her escape out of Hampton Roads, the Confederates scuttled Virginia rather than risk her capture.  Monitor later foundered off Cape Hatteras on December 31 while on her way to support the blockade in North Carolina. Though the life of each ship was short, the global significance of Monitor and Virginia is that they rendered all the wooden navies of the world obsolete and forever changed the future of warship design and naval tactics.

Our Little Monitor is much more than simply an account of the Battle of Hampton Roads. Holloway and White discuss Monitor’s celebration after the battle and its continued appeal in popular culture throughout and after the war. Her gallant defense of Minnesota and her willingness to take on Virginia caused a transformation in public opinion. No longer was she seen as “Ericsson’s Folly.” Instead of referencing her appearance with derisive names like “tin can” or “wash tub on a raft,” the North began seeing Monitor in a more heroic light and she was soon affectionately known as “Our Little Monitor.” From newspaper accounts to compositions of poems, songs, and music to the selling of products, Monitor was celebrated and feted throughout the North and even in places as far away as San Francisco. In Grand Army of the Republic parades after the war, it was often a popular subject for floats. Public speakers invoked the name Monitor as a synonym for courage, reliability and patriotism. The affection grew even greater after Monitor was lost at sea at the end of 1862. Marketing campaigns well into the twentieth century used the name Monitor to sell products such as Monitor Flour, Iron Clad Enameled Iron Ware, Monitor Blend Pure Rye Whiskey, and General Electric’s Monitor Top All-Steel Refrigerator.  In the public’s mind, if “Monitor” was in the name, quality and dependability were in the product, and the product sold.

The first half of Our Little Monitor explores the iron-clad in history and popular culture, and examines its loss, recovery, and current-day preservation.  The second half of the book offers a documentary record of Monitor, including a journal account of Currituck’s escort of Monitor from Brooklyn Navy Yard to Hampton Roads, firsthand accounts of the Battle of Hampton Roads, citizen letters to President Lincoln after the battle suggesting ways to defeat Virginia, a view of life aboard Monitor from the letters of its first assistant engineer, newspaper reports of Monitor’s repair at the Washington Navy Yard, and accounts of Monitor’s final moments before sinking off Cape Hatteras. Taken together, each half compliments the other, and both are made even more engaging by a stunning array of illustrations that help tell Monitor’s story. Holloway and White have put together an excellent resource for the reader that weaves together the ironclad’s history with its importance to the nation as a source of hope and inspiration, and to the entire world as a harbinger of the future of both naval architecture and naval warfare. Both Union and Confederacy continued to experiment with armored vessels during the war, with the Union being the more successful due largely to the Confederacy’s inability to break the blockade or win sufficient foreign assistance.  Meanwhile, the Union continued to be build monitors modeled after the original, as well as armored gunboats, with the latter playing a major role in regaining control of the Mississippi. For the remainder of the nineteenth century and well into the twentieth, the duel of Monitor and Virginia signaled the beginning of an era where navies of the world perpetually tried to best each other with heavier armor and more deadly armaments, eventually leading to the advent of the battleship.

The importance of the Monitor and its duel with Virginia in March 1862 cannot be understated. Whether or not it was the greatest invention of the civil war can be debated, but the fact that Monitor, along with Virginia, forever changed the direction of naval warfare is beyond doubt. Our Little Monitor does a wonderful job of illustrating the ironclad’s importance in naval history by telling its story within the context of our nation’s history as well as in American popular culture and the documentary record. The result is a comprehensive examination of the Monitor’s history, legacy and ongoing preservation that will be the standard work on the Monitor for years to come.

Randall Fortson received his M.A. in history from the University of Georgia in 1994 and is

currently a historian with the Naval History and Heritage Command in Washington, DC.