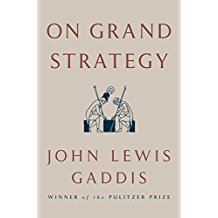 John Lewis Gaddis, an historian of the Cold War and a recipient of the Pulitzer Prize, offers this book as a derivative or emulation of Carl von Clausewitz’s classic, On War. In fact, however, On Grand Strategy surpasses Clausewitz and stands alone as a rumination on the global history of strategy. Often chastised as a doctrinaire conservative scholar of the American foreign policy of the Cold War era, Gaddis in this superlative book has transcended the narrow chronologies of 1941-1960 to roam through western history from a time before the Greeks. In the course of his journey, Gaddis shrinks Clausewitz into a thoughtful but historically limited Prussian staff officer in the age of Napoleon.

Like Clausewitz before him, but with a far wider historical and conceptual basis, Gaddis detects “patterns across time, space and scale.” (p. xii) While demoting Clausewitz, he elevates the Oxford scholar Isaiah Berlin and several other writers to niches of intellectual strategic reverence alongside Artabanus, the uncle and military advisor to Xerxes, who counselled against crossing the Hellespont from Persia into Greece in 480 BCE. Xerxes rebuffed this advice, crossed, and triumphed at Thermopylae, but soon he experienced the destruction of his fleet in the Battle of Salamis and withdrew to his homeland. The combined episodes constitute a striking illustration of the value – or lack thereof – of a strategist’s advice. The question is not Hamlet’s, “To be or not to be?” It is, “Whom to believe, and when?” Should the strategist stand close at hand, or should he or she be embedded in the general’s mind, an element of the supreme commander’s DNA? No strategist stood alongside IKE, who remarkably does not appear in On Grand Strategy, in the war room at Portsmouth on June 5, 1945. But a lifetime of experience and thinking compelled him to decide, “O.K., let’s go.”

From ancient Greece, Gaddis glides seamlessly to the present, citing numerous strategists en route, notably St. Augustine, Machiavelli, Tolstoy, Lincoln – who “intuited Clausewitz” (p. 237) but could not have read the Prussian master who was not published in English until 1873 – Bismarck, Wilson and above all Franklin D. Roosevelt. Gaddis does not dismiss Clausewitz, but instead he portrays the old Prussian as one of many profound thinkers gracing his pantheon of strategists whose works and careers commanders should study and judiciously emulate. For those students of war and strategy who have not the time or inclination for carefully studying a multitude of leaders and strategists, a careful reading of this book by Gaddis will serve as a provocative and suggestive substitute, or as an introduction to more detailed examination of the figures who seem stimulating and relevant. Students at the U.S. war and staff colleges will find Gaddis’s book a wondrously comprehensive, stimulating and digestible introduction to the field of war and strategy.

To justify his interpretive and didactic sweep through 2000-plus years of strategic history, Gaddis at the very end of his book says he has not forgotten his own reputation for focusing on the Cold War: “Not at all – – it’s just that I’ve said enough already on that subject.” (f.n. 2, Preface, p. 315) In the current and banal vernacular, he has moved on. So should all of us who remain trapped in the Clausewitzian cave.