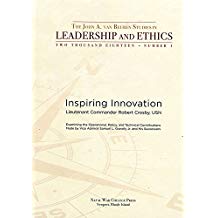 Inspiring Innovation by LCDR Robert Crosby, USN is the first in what is intended to be The John A. van Buren Studies in Leadership and Ethics published by the Naval War College Press. 209 pp., $30.00

“The John A. van Buren studies was established to advance scholarship and publish thought-provoking works of analysis in the fields of leadership and ethics, with special attention to their application to the military; to further CNO initiatives in leadership and ethics; to help educate Naval War College students; and to help inform the joint force.”

This reviewer was attracted to Inspiring Innovation when it was listed by the Naval Historical Foundation as a possible subject for review. The subtitle ”Examining the Operational, Policy and Technical Contributions made by Vice Admiral Samuel L. Gravely Jr. and his Successors” was especially appealing to me as I had enjoyed close association with VADM Gravely during the late 1970s when he commanded the Third Fleet and I was the project manager in NavElex of a multi-project effort to develop a worldwide integrated fleet command and control system. VADM Gravely’s experience as the Navy’s satellite communications program coordinator and his subsequent assignment as Director, Naval Communications Division provided valuable knowledge and experience of great benefit to my efforts. I visited the Third Fleet on several occasions, and on each occasion VADM Gravely gave unstintingly of his time in long discussions related to the development of Tactical Fleet Command Center (TFCC and the associated communications that were a portion of my development efforts. This always valuable operational and technical insight continued when Vice Admiral Gravely assumed Directorship of the Defense Communications Agency from 1978 to 1980. He will always be in my mind the quintessential Fleet and operational commander.

LCDR Crosby illustrates the US Navy’s laggardly acceptance of African Americans by noting that the Navy did not have an African American Flag Officer until 30 years after the US Army and 17 years after the US Air Force. This reviewer’s personal experience is worth noting. As a young Ensign on USS Helena (CA 75) in 1952, the Executive Officer went to great lengths to assure himself that I would not object to having a black officer share my cabin. My roommate was the only black person in a Wardroom of 90-plus officers.

The introduction of LCDR Crosby’s Study is worth dissemination for its documentation of the Navy’s belated implementation of equal rights and for the summary of the careers in the Navy’s first fifty African American Flag Officers. However, the manner in which it is done is disappointing. Each of the officers is defined only by a photograph in his or her senior uniform and a brief biography (usually only a paragraph). This is followed by a short summary (frequently only a few sentences) of his or her career, awards, and citations.

The study is notable for showing clearly what should be obvious: that African Americans are fully capable of successfully functioning at Flag Officer level in both operational and technical assignments. However, it says little about how they used their training and skills to succeed in an adverse environment of discrimination. Moreover, the study raises the question how much more could others of similar race and background contributed, if given an earlier opportunity to serve in an unrestricted manner? For this reason alone the Study should be included in any list of required reading at the Naval Academy, all NROTC colleges and OCS and discussed in class.

My disappointment with the Study is that, while important for what it does, it lacks context and perspective. Merely citing accomplishments derived from service records leaves one with the impression that a junior research assistant could have done as well in compiling the Study. There are no details to provide insight into the conditions that the individuals faced in achieving their notable accomplishments or the lasting impact their accomplishments had on the Naval Service. With the exception of a summary of Admiral Zumwalt’s efforts, there is little mention of mentoring efforts on behalf of black officers although the reviewer suspects that others were involved.

Inspiring Innovation is start, but a perceptive reader must infer that there is more to this story and hope that others will provide more detail on the significant change that has taken place within the US Navy and of the wide-ranging benefits that have resulted.