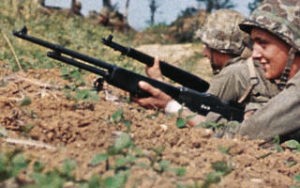 The series continues with more riveting footage of the Pacific war, some rare and never seen.  The allies are closing in on Japan.  Behind-the-scenes film and the voices of combat veterans leave the viewer feeling the fight.

The Philippines are liberated, but the islands are in tatters.  Rarely-seen home movies vividly demonstrate the devastation of Manila.  The same movies show the faces of rebounding inhabitants who are overjoyed to finally be liberated.  USO entertainers bring laughter where horror recently existed.  It is fascinating to see a young Bob Hope and his troupe bring enjoyment to troops all over the Pacific.

Previous documentaries have thoroughly covered the invasion of Okinawa and its aftermath.  What is different here is the sound of the combat voices before the invasion expressing anticipation of what lies ahead.  There was no Japanese resistance for several days after the landing and combat film shows the troops relaxing and enjoying life.  But then all hell breaks loose.  On the fifth day the kamikazes reappear.  Japanese footage captures the determined faces of the suicide pilots before their mission.  Combat footage documents this tragedy offshore.  The fleet is a sitting duck and the voices of the combat veterans describe the terror as the planes hurtle toward the ships.  The viewer sees twisted steel and blood.  Haunting scenes of burials at sea bring home to the viewer the tragedy of these events.  Vividly shown is the effect of soaking rains that bring the ground offensive to a screeching halt.   Scenes of the impassable muck and bogged down tanks and other vehicles place the viewer in the middle of the dilemma.  The impossible conditions make war impossible and sink morale.

Seldo- before-seen film taken at a sideshow of the Okinawa invasion shows the liberation of Borneo by allied troops.  Borneo was an important source of raw materials for Japan.  We see the shore bombardment by U.S. ships and planes and the amphibious landing by the Australians.  Faces of the native Indonesian population exhibit the abuse and neglect suffered during the Japanese occupation.

Another segment of Episode Seven shows a tragic event that should have been avoided but wasn’t.  A U.S. submarine sinks two Japanese merchant ships carrying allied POWs from a camp in Thailand (building the bridge over the River Kwai) to Japan.  Footage shows the rescue of 150 of the oil-soaked survivors.  POW voices describe the horror of the camp where 1/3 of the prisoners died.

Okinawa is taken after 82 days of intense fighting.  There are 12,500 allied troops killed and 36,000 wounded.  Japanese casualties are far greater, and its troops fought to the end with no surrender.  Victory has been costly, but the allies are now on Japan’s doorstep.  The lesson is that an enormous number of casualties can be expected when/if Japan is invaded.  The conclusion of this excellent series will describe the final days of the war in the Pacific, the momentous decision that ended it, and the rebirth of Japan.