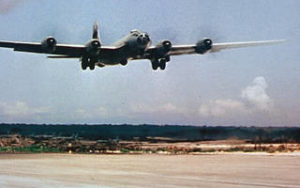 Episode Six-Fire from the Sky

The viewer continues to enjoy never-broadcast color footage of the World War ll conflict in the Pacific area, even though the events in this episode have been detailed on TV many times before.  In the central Pacific theater island-hopping continues, while in the south Pacific theater the battle for the island of Peleliu becomes one of the enduring question marks of the Pacific war.  Rare home movies and voices from the front lines keep the viewer in the middle of the action.

Replacement troops are seen training on a south Pacific island, which is described as not a paradise, but a hell hole.  Veterans are “scared to death” because they know what is coming, but some welcome a return to combat to get away from this “hell hole of an island.”

Peleliu, one of the Palau Islands, is subjected to a heavy naval bombardment prior to the invasion and the voices of the combat veterans graphically describe the terror of landing on an island that seems to be on fire after the bombardment.  Peleliu was considered strategically important to the success of the recapture of the Philippine Islands because two Japanese airfields were located there.  Throughout this episode the voices of the combat veterans are carefully coordinated with the film footage and the narrator’s dialogue to describe the battle.  It takes two weeks to secure both airfields, which were, in reality, never a threat to the Philippine invasion.  Dramatic color film of a medical evacuation is burned into the viewer’s memory.

The B-29 is American’s newest bomber, but crews must train in other aircraft until the new bomber arrives.  The viewer sees the B-29 being flown from the U.S. to the Mariana Islands, a voyage described as “…a flock of giant migratory birds.”  Captured Japanese films show preparations for the impending air raids on the homeland.  “Hell is upon us” according to one Japanese admiral. However, the high altitude bombing plan for the B-29s fails to prove its worth.  Many are damaged during the air raids and a location closer to Japan must be found to land the damaged aircraft.  Enter the next island hop to Iwo Jima which becomes a slaughter house as seen many times in previously broadcast documentaries.  An apt description of the island is “A beacon of bravery.”

General MacArthur returns to the Philippines as the invasion unfolds on Leyte.  Newly broadcast home movies show the natives heading to the invasion beaches for protection and the rainy season muck which bogged down the invaders and disrupted the supply lines.  Combat footage shows the new Japanese weapon, the kamikaze, and dramatically demonstrates the terror in the fleet it brings with it.  Home movies show prewar and post war Manila, now a pile of dust.  The inhabitants strive for normalcy.

Iwo Jima is ultimately captured and becomes a life raft for damaged aircraft, but the plan of high altitude bombing is still not working.  General LeMay comes up with a new plan—night fire bombing at low altitude with Tokyo as the only target.  Spectacular night movie footage vividly shows the results.  Tokyo is in ashes.  The Japanese Empire appears to be on the verge of collapse, but no surrender is in sight.  Episode Seven will demonstrate that the war in the Pacific is not about to let up.