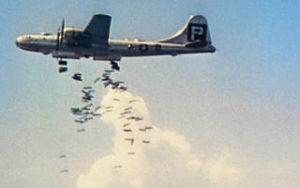 Each episode leaves the viewer wanting more.  Episode Four left us looking forward to seeing more of some of the first broadcast color movies of the Pacific War.  Episode Five does not disappoint.  The voices from the past once again help us to feel the fight and the impact on their lives, supplementing what the films cannot convey.

Major General Curtis LeMay is given a top-secret assignment—fly B-29s from bases in India to bomb Japan.  The B-29, a new aircraft rushed into service, is very unreliable at this point and its range is only 1600 miles.  The general’s home movies, never broadcast before and not your typical tourist films, and his words, convey the difficulty of this task.  The plan is eventually scrapped, and the Marianas, much closer to Japan, will become the new air base for the B-29s after Tinian and Guam are recaptured from the Japanese.  LeMay’s movies capture life in India as he arrives on his mission and in the Marianas after the battle for Tinian is concluded.

Color footage and the voices make it obvious that retaking Guam will not be easy.  U.S. manpower has eroded, and the voices of combat veterans are heard trying to help those fresh out of boot camp as well as expressing apprehension and fear about what lies ahead.  Prewar and post war color film vividly illustrate the feelings of Guam’s native Chamorros about the trajectory  their lives—from enslavement to freedom.  The fight for Guam is vicious and the voices again supplement what the films can’t convey.  Scenes of the burial of U.S. casualties are heart rending.  Somewhat confusing is the frequent shifting in battle footage between Guam and Tinian.

The fight for Tinian will not be easy.  Nine thousand Japanese soldiers remain on the island, and the voices of American combat veterans are wondering how many more beaches they will have to storm.  It takes nine days to subdue Tinian and five more months to clean out isolated pockets of resistance.  Films show the development and use of new weapons—napalm, aerial photography, and causeways to land supplies—as this battle rages.  One voice notes during the battle, “We don’t need tanks, we need undertakers.”  Tinian natives emerge from hiding with an unknown future under an unknown occupier.

The Marianas have now become the center of power in the Pacific.  Film shows troops training in Hawaii for the future invasion of Japan.  Historic film shows President Roosevelt, Admiral Nimitz and General MacArthur meeting in Hawaii to discuss strategy.  Evident is the animosity between Roosevelt and MacArthur, who wants to retake the Philippines.  Nimitz proposes to continue island hopping.

This leads the viewer to what will unfold in Episode Six.  MacArthur prevails with Roosevelt which means Peleliu, which has a Japanese airfield that threatens the Philippines, must be secured to pave the way for his invasion of the Philippines.  The viewer is left with the impression that while the Americans at this point had a sense of victory, the Pacific War follows no one’s pattern.  Onward to Peleliu.