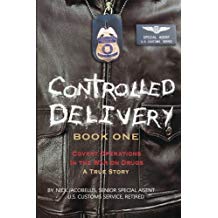 Within the pages of these two self-published volumes, the author provides a firsthand look at the interdiction by the U.S. Customs Service during the late 1980’s of the flow of illegal drugs moving from Columbia to Florida. The heart of the story revolves around an undercover operation conducted by a special task force that was known within the Customs Service as The Blade Runner Squadron, which between 1989 and 1991 used air assets to transport drugs for the cartels from Columbia to Florida. The function of The Blade Runner Squadron was not to identify the street sellers of illegal drugs, but to identify those in Columbia who packaged the illegal drugs for delivery to the United States and those in the United States who handled the illegal drugs in bulk quantities.

The heart of the book is based on the author’s desire to become a pilot in the U.S. Customs Service. His tale centers around how he became a pilot and then how he used this skill to interdict the illegal drug traffic within the Caribbean Sea area. While the story in this book is told in the first person, we learn little from its text about the author himself. What we do learn is how to be a good field agent and how to maximize the assets of one’s own agency when conducting field operations.  In telling his story, the author provides tidbits concerning both direct and indirect support provided to the Customs Service by various assets controlled by the United States Navy, Coast Guard, and Air Force.

One theme that connects all the stories in the book is money. Money is the constant friction and grease that impacts operations. Money is needed to cover a multitude of costs that, while they seem irrelevant to the operation being planned, are a necessary overhead. The proven informant must be wined and dined even when he has no information to provide because next week who knows what information he will have stumbled upon. Interestingly, most of the costs associated with keeping The Blade Runner Squadron operational were derived from payment from the cartels for moving their illegal drugs or from assets seized from those handling the illegal drugs. One overriding lesson the author hammers home in chapter after chapter is that no matter where the money originates, one needs to maintain a paper trail of where the money came from and went to.

While this book is not about the Navy or one of the United States military services, anyone interested in the use of aircraft as part of a law enforcement operation will enjoy this well-written book. Any naval officer finding himself or herself tapped to serve as a liaison officer with the Customs Service would do well to read this book to get an understanding of the culture of that agency.