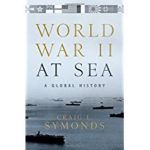 The author of this monumental and unique book, Craig L. Symonds, a former colleague of mine, writes to fill what he sees as a massive gap in World War II historiography. He laments the fact that “no single volume evaluates the impact of the sea services from all nations on the overall trajectory and even the outcome of the war.” [xi] Taking up the challenge, he treats the global war at sea, from 1939 to 1945, as one unit and not as distinctive, barely related, oceanic “packets” [xi] or separate theaters of operations. To his credit, while consolidating and narrating the strategy and grand tactics of the maritime Armageddon, he hopes to “tell the story . . . the way contemporaries experienced it . . . .” [xii]

One tragedy above all others retains its original poignancy. In the Naval Battle of Guadalcanal, on 13 November 1942, the light cruiser Juneau was torpedoed and sunk by the Japanese. Only ten crewmen of an original 660 survived. Among the dead were the five Irish-American Sullivan brothers who had demanded to serve on board the same ship, despite the Navy’s prudent reluctance. President Franklin D. Roosevelt offered their mother his “deepest sympathy” and pledged, “We, who remain to carry on the fight, must maintain the spirit in the knowledge that such sacrifice is not in vain.” [NHF Google Chrome, Honoring the Sullivan Brothers] Herself as preternaturally heroic as her sons, Mrs. Sullivan went on to sponsor a warship and to enlist her remaining family members in fund-raising for the war!

A dutiful critic hoping to be dispassionate cannot help but observe that in many ways this book is a triumphal ode to the U.S. Navy and America’s industrial majesty. Symonds’s case for the Navy’s triumph in the Pacific is unexceptional, but in Europe he may be extending himself a bit. According to the author, at Omaha Beach in Normandy on 6 June 1944, the lethal and nearly impregnable bunkered German guns had paralyzed the American invaders, leaving the living stretched out corpse-like on the sand. To aid their imperiled fellow warriors, and absolutely without prior planning, the sailors of U.S. Navy destroyers inched their ships to the water’s edge and opened fire on the bunkers, transforming the battle ashore: “the cumulative effect of aimed fire from the smaller 5-inch guns on the destroyers began to take them out one by one.” [532] As if awakening from the dead, “the men pinned down on the beach [began] to rise and work their way to the base of the coastal cliffs. Then they began to climb.” [532] The Americans would not be driven into the sea, largely because of the fire support they had received from the destroyers.

The massed manufacture of those dauntless destroyers, as well as the innumerable landing craft and transports and warships of all classes, constituted “the single greatest contributor to the maritime success, namely, the ability of Allied – and especially American – shipyards and shipyard workers to build transports and warships of every type faster than the Axis could sink them.”[641] By this accounting, the maritime war was won in the American industrial heartland every bit as much as on the oceans, beaches and battlefields. With this very modern assessment, Symonds aligns himself with the latest research and syntheses.

While Symonds is undoubtedly correct about the omnipotence of U.S. industrial output, he is on less firm ground in bowing to President Harry S Truman’s decision to award William F. Halsey rather than Raymond A. Spruance the cherished fifth star of fleet admiral, following William D. Leahy, Ernest J. King and Chester Nimitz. The impulsive Halsey radiated a popular and belligerent persona. The cerebral Spruance was taciturn and remote. Both made tactical-strategic errors, but as Symonds definitively demonstrates, Halsey’s error of abandoning and endangering the assault at Leyte Gulf in October 1944 in favor of seeking to destroy Japanese carriers far to the north was especially reprehensible. Halsey may have boosted American morale on the home front with his early carrier raids, as President Truman recognized with the fifth star, but Spruance early on turned the tide of the Pacific war by winning the decisive Battle of Midway in June 1942.

The author’s reluctance to criticize President Truman’s beatification of Halsey is a minor – and perhaps defensible – lapse in a great book. At 770 pages the volume is thick, but it is not dense. Rather, it is lucid, coherent, cogent and largely convincing. It belongs on the nightstand (reinforced for weight) of every student of history’s most encompassing and destructive man-made cataclysm. It comes as close as is possible to achieving Craig Symonds’s goal of writing a unified naval history of World War II. He has created a new standard of comprehensive, literate scholarship for that war. In the Navy’s parlance, Craig Symonds merits a Bravo Zulu.