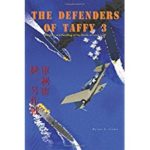 The Defenders of Taffy 3: Analysis and Retelling of the Battle of Leyte Gulf

This print-on-demand paperback book is destined to be the benchmark against which all future accounts of the struggle of Taffy 3 to survive its encounter with the Japanese Navy will be measured. Taffy 3, the United States Navy’s code name for Task Unit 77.4.3, was a part of the U.S. Navy participating in the 1944 Return to the Philippines Campaign. Taffy 3 consisted of six escort carriers, screened by 3 destroyers and 4 destroyer escorts. On 25 October 1944, Taffy 3 was attacked by 4 Japanese battleships, 8 cruisers, and 11 destroyers, led by the 18.1-inch gun armed battleship Yamato. This fight would be recorded in history books as the Naval Battle off Samar.

Using primary sources, the author, in riveting detail, tells the story of Taffy 3’s struggle to survive the Japanese Navy’s onslaught. Taffy 3 was both outgunned and at a speed disadvantage to the attacking Japanese ships. Fighting back against these overwhelming odds, Taffy 3 would survive this battle due to the bravery of its ships and aircraft.

With a free flowing but very descriptive text, the author tells the story of the naval battle. Both the air and surface components of the battle are covered. The main focus of the story is told from the American perspective by covering the actions of both U.S. Navy officers and enlisted men involved in the battle. The reader is thus drawn into the battle by these accounts, which are supported by very detailed charts showing the locations of the individual ships of both fleets involved in this engagement. These charts allow the reader to set the story in context and follow the change in relationships between individual ships and the two naval forces as the timeline of the action advances. The author includes an account of the part Taffy 1 and Taffy 2 played in this battle.

The story is supported by an excellent selection of photos and illustrations of the aircraft, ships, and equipment referred to in the story. This allows the reader to better visualize the various material components of the battle that form the heart of the story. This book is more than a worthy addition to the story of the Naval Battle of Samar, but it is also an example of how one should use maps, photos, and illustrations to reinforce and illuminate the story being told in a text. This book is a keeper.

Mr. Bogart is a frequent contributor to NHBR.