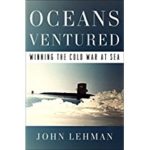 NOTE: Having been asked to review Oceans Ventured for an academic journal later in the year where I will detail  how this fits into the growing historiography of the last decade of the Cold War, I have chosen to write this “preview” from the perspective of a surface warfare officer of this era who participated in several of the exercises cited by Secretary Lehman.

Following the signing of the Incidents of Sea Agreement on May 25, 1972, Fleet Admiral Vladimir Kasatonov whisked Secretary of the Navy John W. Warner onto an airplane for a flight to Volgograd, once known as Stalingrad, to tour sites associated with the epic World War II battle. The tour concluded with a visit to the monument titled “The Motherland Calls.” Looking up at the huge statue, Kasatonov pointed out to Warner that the female figure pointed to the west, the direction the threat lay.

Over the next few years of détente, the Ford and Carter administrations attempted to placate Soviet concerns about the western threat by scaling down conventional forces and allowing the Soviets to increase their nuclear forces with an aim to achieve parity. However, then-CNO Admiral James L.  Holloway III argued that control of the seas was imperative for American credibility to maintain its military alliances. After emerging frustrated from one meeting with President Carter’s Secretary of Defense Harold Brown, Holloway’s aide turned to him and quipped “I guess our new slogan for the upcoming Army-Navy game is ‘Tie Army’.”

However, with setbacks in détente in the late 1970s, Brown did allow Holloway to proceed with developing proposals for using naval forces assertively as a central part of an alternative approach on dealing with the Soviet Union. Sea Plan 2000 provided seeds for what would become known as “The Maritime Strategy.”

When Ronald Reagan was elected president in 1980, John Lehman was chosen to be Secretary of the Navy – the youngest in the history of the republic. As Lehman acknowledges, his selection had been supported by several senior naval officers he had met during his tours on naval reserve duty as he worked toward his doctorate at the University of Pennsylvania. With the backing of President Reagan, the scheduled NATO exercise for late 1981, Ocean Venture, took on more aggressive objectives, signaling to the Soviet Union that if the balloon went up, American and NATO naval forces would not be passive. Lehman admits that for the 1981 exercise, the U.S. Navy simulated capabilities it had yet to acquire but soon would, thanks to the Reagan administration build-up to a 600-ship fleet and the arrival of new systems such as AEGIS and Tomahawk.

During Ocean Venture, the exercise that inspired the book title, this naval officer stood on the sidelines at Newport, undergoing surface warfare training. However, a year later, assigned to the ammunition ship Suribachi, I had an opportunity to participate in Northern Wedding – sort of. Throughout Oceans Ventured Lehman discusses how such admirals as James “Ace” Lyons were masters of deception. Because Suribachi was a logistics ship, a Soviet AGI decided to tail us as we left the Eastern Seaboard, figuring that all of the combatants would eventually need to “come to mama.” Well we got vectored out towards the Canary Islands with the snooping trawling in tow as the rest of the fleet sped to the northeast toward Scandinavia.

Reading through the descriptions of these various exercises brought back many memories for me, and certainly is a reason why this book should be acquired by the tens of thousands of my fellow Sailors who served at sea during this era. Secretary Lehman does a fine job of placing our service and what we accomplished in historical context.

That said, what I found lacking in the context was the growing threat from the Soviet ballistic missile fleet.  On page 42 Lehman discusses dramatic and sensitive naval intelligence breakthroughs made in the late 1970s but does not mention what those breakthroughs were. In essence, rather than refight the Battle for the Atlantic III, like the Germans in the first two world wars, the Soviets were going to place their missile boats in a bastion near home waters to create a strategic missile trump card in the event of all-out nuclear war.  This appreciation of Soviet doctrine became an important component – if not the most important component – of a U.S. maritime strategy that had a “no bastions for the Bear” element. Lehman touches this aspect of the strategy tangentially throughout the narrative, however, his emphasis focuses on threatening targets ashore in the Soviet Arctic and Pacific regions.

By detailing the role the naval exercises played in signaling to the Soviets that the U.S. Navy would be a force to be reckoned with in a global conflict, Lehman makes a valuable contribution to the yet-to-be-written definitive account of this era. Oceans Ventured also serves as an important reminder of the importance of sea power in the contemporary world and serves as a clarion call for a substantial uptick in procurement to confront emerging threats.

Dr. Winkler is the author of the recently published Incidents at Sea: Confrontation and Cooperation between the United Stated, Russia, and China, 1946-2016.