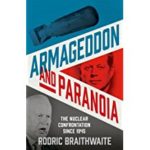 Armageddon and Paranoia: The Nuclear Confrontation Since 1945

This book provides an overview of the part nuclear weapons have played within the world’s scientific, political, and military arena since the 1930s.  While the main focus is on the development and deployment of nuclear weapons in the United States and Soviet Union, the other countries that have aspired to having (or who have manufactured) nuclear weapons are touched upon: France, the United Kingdom, Pakistan, Iran, Israel, Iran, China, and North Korea. The author of this book is the former British Ambassador to the Soviet Union and thus writes with some authority on the Soviet nuclear program. While one cannot say that the author provides total net neutral examination of the United States and Soviet Union programs, the author’s overall presentation is generally even-handed.

One question the author posits at the beginning of the book is why Murphy Law (“If anything can go wrong it will go wrong.”) did not come into play during the nuclear confrontation between the United States and the Soviet Union. Specifically, while both sides deployed nuclear weapons and threatened to use them, neither side did. This is an excellent question to keep in mind as one reads through the events presented in book’s pages, including the Cuban Missile Crisis, and efforts to control the proliferation of nuclear weapons during the SALT Talks.

Mixed in with overview of nuclear weapons deployment are stories about anti-nuclear bomb demonstrations and Civil Defense efforts to protect the civilian population from the effects of nuclear weapons. An appendix at the end of the book provides a chronological listing of the major events covered in this book.

The author closes his book by listing four reasons that have been put forward by various Cold War historians on why no nuclear weapons were used after the 1945 bombing of Hiroshima and Nagasaki. These are: 1) the concept of mutual assured destruction worked; 2) the destruction of human life and property during World War II had such an effect on world leaders that they did everything to ensure this did not happen again; 3) European human nature had evolved to where it was less inclined to all-out war; and 4) we were just lucky. The reader can make up his or her own mind about which of these theories is closest to the truth.

All in all, this is a thoughtful book, well-worth reading for insight into weapon development and use, and how they are viewed by the political, military, scientific, and general public sectors.

Charles H. Bogart, USN 1958-1961, is the author of some 100 articles on military and naval history and author of five books. President Frankfort Civil War Roundtable, former Chairman Coast Defense Study Group. He holds a BA in History from Thomas More College and an MCP from The Ohio State University.