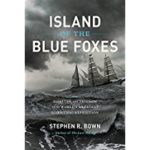 Island of the Blue Foxes: Disaster and Triumph on the World’s Greatest Scientific Expedition

Island of the Blue Foxes tells a gripping story that holds the reader’s attention while remaining a well-documented piece of nonfiction.  Bown tells the story of two Russian Arctic treks: the unsuccessful First Kamchatka Expedition (1725-1730) with only 50 days at sea and “The Great Northern Expedition,” also called the Second Kamchatka Expedition (1733-1743) with months at sea. The focus of the Island of the Blue Foxes is the second trek, one of the largest and most expensive explorations in global history.  Its goal was to map most of the Arctic coast of Siberia and parts of the North America coastline. Bown’s book notably includes the valuable and illuminating “A Note on Sources and Future Reading” (pp. 269-271) which provides the reader with written contextual history.

Bown is also the author of The Last Viking: The Life of Roald Amundsen and White Eskimo: Knud Rasmussen’s Fearless Journey into the Heart of the Arctic, a biography of the Norwegian explorer (1872-1928) who reached the South Pole in 1911, led an air expedition to the North Pole in 1926, and traversed the Northwest Passage 1903-06 (Cambridge, MA: Da Capo Press, 2012).  It won the Williams Mills Award for the best book on the Arctic in 2016. Clearly, Bowen has significant prior experience in researching and writing Arctic-based nonfiction. In this book, he uses a variety of expedition diaries, letters, and official reports to provide an engrossing narrative of “the most extensive scientific expedition in history.”

Briefly, in the second half of the eighteenth century the Russian Empire was already the largest terrestrial polity and began to expand its domain onto adjacent oceans. The Second Kamchatka Expedition incorporated a long-standing vision of the Russian Navy to map a Northern Sea Route from Europe to the Pacific, an endeavor sponsored by the Admiralty College in St. Petersburg. With over 3,000 people directly and indirectly involved, the Second Kamchatka Expedition was one of the largest such projects in history. Its cost, completely financed by the Russian state, reached an estimated 1.5 million rubles, an enormous sum for this era — approximately one sixth of the income of the Russian state at this time.  This ten-year venture, led by Bering and including scientists, artists, mariners, soldiers, craftsmen, and laborers, would “discover” Alaska, open the Pacific fur trade, and led to fame and shipwreck, and to “one of the most tragic and ghastly trials of suffering in the annals of maritime and Arctic history.”

Island of the Blue Foxes is a fast-paced narrative with a “Prologue,” four parts (each with four chapters), an “Epilogue,” twenty-five pages of scholarly “Notes,” and a “Select Bibliography” with fifty entries; there is no “Index.” Alas, the “Advance Reading Copy” provides no maps and the “Contents” does not list any; one hopes that the final publication includes appropriate maps.

“Part One: Europe” provides brief biographies of Bering and his wife, Empress Catherine and Ann Ivanova, and persons who play a significant role in the endeavor.  Bown next summarizes the First Kamchatka Expedition: five years cross-country with horses, dogs, and sleds as well as numerous river fordings where boats or barges had to be constructed.  Detailed plans for the subsequent expedition are documented and he was assigned the  additional task of pioneering a route to Japan via the Kuril Islands. The “hugely expanded goals” initially necessitated a party of 500 explorers, scientists, craftsmen, and laborers, plus 500 soldiers and officers, thousands of horses and hundreds of dogs. Local laborers were to be recruited along the way. The scientists were members of the Russian Academy of Sciences and included three major academics: Johan Georg Gmelin (a naturalist, chemist, and mineralogist), Gerhard Friedrich Muller (an historian), and Louis Delise de la Croyére (an astronomer and geographer). In addition, the wives and children of some scientists, and soldiers and Bering’s family (his wife and two children) accompanied the party; the ladies brought all the comforts of home: fine china, furniture, fancy clothing, and other necessities including wine and food. The expedition was divided into an advance party leaving in February 1734 and a second leaving in April with supplies, including 28 iron cannon.  This unwieldy expedition would take three years to trundle across 6,000 roadless miles of Russia and Siberia.

In “Part Two: Asia,” Bown recounts the journey from St. Petersburg to Siberia, commandeering food, horses, and 2,000 laborers along the way. They contended with quarreling factions, the construction of oceangoing vessels, and the attempt to locate “Phantom Islands” in the Pacific Ocean. The expedition reached Yakutsk by October and sought a better route to the east, but the advance group was “incompetent” and preparations were lacking for the second contingent’s arrival, forcing unanticipated delays.  While factions quarreled, disdain (by the Germans) for the Russians and Siberians grew, and drunkenness became an issue.

By May 1738 logistical challenges and hardships (primarily food shortages, illness, and desertion of laborers) added to Bering’s woes and expedition costs rose astronomically to 300,000 rubles — ten times the amount he had budgeted for this part of the expedition. Three ships, requiring the cutting of 300 trees per vessel, were constructed on the Okhota River and sailed independently 1,100 km to the western coast of the Kamchatka Peninsula (initially thought to be an island).  About 30 Pacific islands were charted without going ashore but Bering had not yet crossed the sea to Okhotsk to Kamchatka, let alone to America.

By May 1741 two large new ships for the “American Expedition,” the St. Peter and the St. Paul, each 90 feet in length, had been constructed in a shipyard built by the expedition using local lumber and metal fittings brought from St. Petersburg. Each vessel was provisioned with 106 tons of cargo, 77 men, and 14 small cannon. Bad weather, fog, contrary winds, insecure harbors, and charts with non-existent islands plagued the voyage of the two larger vessels, while crews and officers argued about navigation (Steller’s task) and seamanship.  One group in the St. Paul, captained by Aleksei Chirikov, sailed south and made Russia’s first contact with Japan. The St. Peter under Bering’s command sailed through the strait that eventually bore his name, reaching Alaska and reconfirming that Russia was not connected to America. The two ships never linked up again.

“Part Three: America” focuses on the six-month search for North America, with Bering in the St. Paul eventually viewing Mt. Saint Elias, Alaska, reaching Kayak Island and locating Tlingit food caches which they raided, leaving gifts of iron kettles and knives. In a search for potable water, they visited Kodiak Island, Nagai Island, and Shumagin Island next, where they encountered some native Aleuts.  Diet and illness beleaguered the crew, now suffering from advanced scurvy, dysentery, and typhus, as well as mental depression further complicated by a week of constant storms.  Bering’s ship was battered by the storms, and in November it was wrecked on the shore of Bering Island, which some of the crew thought to be the coast of Kamchatka. “Chapter 10: Island of the Blue Foxes” recounts the encounter with a subspecies of Arctic fox (Vulpa beringensis).  The explorer’s camp on Bering Island was mistakenly located on the foxes’ burrows and the men were besieged by “hoards” of foxes which ate the hands and feet of the dead and attacked the living. Bown writes that there was a “mindless slaughter on both sides” and the surviving crew avoided starvation by the “dreaded necessity of eating the hated foxes.” Bering fell ill with scurvy and died “miserably” on December 8, 1741. Soon after, the St. Peter was broken to pieces by high winds. The stranded crew wintered on the island, but 28 crew members died. When weather improved, spring brought a new food source — migrating seals and otters. The 46 survivors built a 40-foot boat, a new St. Peter, from the wreckage and with Sven Waxell  in command set sail for Petropavlovsk in August 1742, ultimately reaching the shore of Kamchatka and bringing word of Bering’s death and the fate of the venture ten years after the expedition began.

The “Epilogue: Russian America” assesses the significance of the geographic and scientific accounts of the expedition, as well as its incredible duration, bickering and suffering. Russia’s autocratic leaders, against Peter the Great’s explicit wishes, suppressed the new information, although it gradually became available over the next several decades. Delise de la Croyére published the expedition’s maps in 1752 and Waxell published his memoirs in German in 1756. In 1991 a joint Danish-Russian Archaeological Expedition located and exhumed Bering’s grave and those of five other mariners.  An analysis of the remains indicated that Bering had not died of scurvy but likely as a result of the many hardships he had suffered during the expedition. Bown discusses briefly the results of the Great Northern Expedition (pp. 239-242) particularly in terms of the ramifications for the Russian Empire and Northern Pacific America. Notably, the fur trade in otter, seal, and blue fox skins eventually led to a colonial-style corporate monopoly with the promotion of Russian culture and Russian Orthodox religion. Perhaps the true legacy of the expeditions is the remarkable forbearance and human ingenuity employed by the expedition’s survivors in the face of numerous privations.

The latter part of the book deals mostly with Bering’s part of the story; readers must look to other publications for Chirikof’s ventures to Japan on the St. Paul. Likewise, readers would probably be interested in learning how some members of the expedition, particularly the academics, ultimately returned to Russia and Europe and what happened to those who chose to remain in the Russian Far East.

This is a masterful telling of a true story and makes the reader may want to read more of Bown’s recounting of maritime adventures: White Eskimo: Knud Rasmussen’s Fearless Journey into the Heart of the Arctic (2012) and Madness, Betrayal and the Lash: The Epic Voyage of Captain George Vancouver (2008) as well as  The Last Viking: The Life of Roald Amundsen (2012).