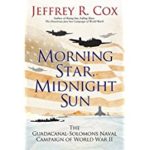 Morning Star, Midnight Sun represents the author’s second foray into the war in the Pacific. His Rising Sun, Falling Skies, The Disastrous Java Sea Campaign of World War II (Osprey, 2014) covers the naval war in the southwest Pacific from Pearl Harbor prior to the battle of the Coral Sea. With this edition, Cox, a midwestern attorney, is well on his way down a secondary career path as a chronicler of the war in the Pacific. For this second effort, he bypasses the Battles for the Coral Sea and Midway and dives into the first three months of the campaign for Guadalcanal, starting with the landings on “Cactus” and the disastrous Battle of Savo Island, ending with the Battle of Santa Cruz which cost the Americans the carrier Hornet, reducing our carrier strength in the Southwest Pacific to a damaged Enterprise.

This is a synthetic work. Cox apparently has amassed an impressive library of previous books on the topic and heavily cites John Lundstrom, Richard Frank, Robert Leckie. James Hornfischer, Eric Hammel, Samuel B. Griffith and some guy named ibid. No references to archival sources. In other words, there is nothing original here. This is old wine rebottled.

As someone who is currently writing on this period focused on one ship, I have reviewed the works of many of the above cited authors and as I read Cox’s well-crafted narrative, I often thought, “He got this from Frank, he got that from Hornfischer, etc.” This begs the question with the passing of the greatest generation and their collective memory as well as the declassification of practically everything that was classified: do we really need to mine primary source materials anymore? The answer is emphatically YES!

As good as the above authors were in extracting information from archives located at the Naval History and Heritage Command, National Archives, other repositories, and from oral histories, memoirs, and correspondence, it must be remembered they were selective with the material they chose to utilize. Contemporary researchers often look at previously picked over documents and can extract additional insights. In addition, thanks to the Library of Congress Veterans History Project, there are nearly 15,000 interviews with World War II Navy veterans that have been collected over the past 15 years.

While Cox’s narrative is old wine rebottled, it must be remembered that some wine improves with age and the challenges the Navy and Marine Corps faced between August and October 1942 are well worth recounting. Though the U.S. Navy pulled off a spectacular triumph at Midway in June 1942 that is annually celebrated within the service, the fact remains that the Japanese still maintained a preponderance of naval power in the Pacific.

For those who are not familiar with the naval struggle in the southwest Pacific during this time frame or who desire to read a good refresher, Morning Star, Midnight Sun is highly recommended. Those familiar with the works of the authors cited can take a pass.

Dr. Winkler, contracted with the Naval Historical Foundation, is currently writing a narrative centered around a diary that was maintained by an officer on the light cruiser USS Atlanta.