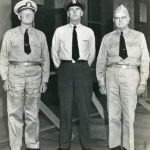 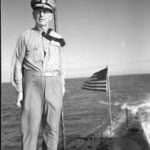 With the 75th anniversary of the creation of the rank of Fleet Admiral next year, and in conjunction with a Five-Star Mess Night scheduled for the Saturday May 19  NHF members and friends are invited to attend an informative and thought-provoking morning on Wednesday, May 16, to discuss the four naval officers who attained the rank of Fleet Admiral: William D. Leahy, Ernest J. King, Chester W. Nimitz, and William F. Halsey Jr.

Dr. David Rosenberg, a retired naval intelligence officer who attained his doctorate from the University of Chicago before holding faculty positions at the Naval War College, Temple University, and the National War College, will first discuss the uniqueness of the five-star rank in the United States military and place it in context with other nations such as Great Britain and Russia. As a scholar of Admiral Arleigh Burke, Rosenberg has been able to gather insights on all four individuals and will highlight very contrasting personalities and backgrounds, summarizing the careers of the four fleet admirals.

Dr. David Kohnen, the new director of the recently established John Hattendorf Center for History at the Naval War College, earned his doctorate at Kings College London and is currently writing a biography on Fleet Admiral King titled Two Kings and the Navy “Second to None”: the U.S. Navy and Fleet Admiral Ernest J. King in the Fifty Years War for Command at Sea, 1897-1947.  With the ongoing centennial of World War I, Kohnen has been exploring the command relationships that evolved after America entered that conflict in April, 1917 shortly after the arrival of William S. Sims in London. Those command relationships certainly influenced a young Cdr. Ernest J. King serving as a staff officer under Commander-in-Chief Atlantic Fleet, VAdm. Henry T. Mayo. Whereas during World War I the United States Navy was quick to align itself and come under British operational control, Kohnen, at a conference in the U.K. in 2016 would proclaim the USN in World War II would truly be a “King’s Navy.”

Dr. Thomas Hughes, having earned his doctorate from the University of Houston, is the author of the recently published biography Admiral Bill Halsey: A Naval Life from Harvard University Press. Hughes looks at the years 1914 to 1922, when Halsey served in destroyers, much of the time under the direction of Admiral Williams Sims, one of the Navy’s greatest reformers. Hughes argues that aboard destroyers and with Sims, Halsey learned most of what he ever would of naval fighting, of command, and of leadership. With destroyers, he developed an appetite for the controlled melee, a schema that had atrophied in the era of formalist battleship tactics.  Under Sims, he acquired a subtle command hand and a supple sense of leadership, coming to understand that while the writ of command came by fiat from above, the warrant of leadership was bestowed only from below, and to value the latter more than the former.

Following the presentations and a short break, Dr. Rosenberg will invite the presenters and some contemporary naval leaders to join a roundtable discussion. Naval Academy Superintendent VAdm. Walter E. Carter, Jr., and Director of Naval History retired RAdm. Samuel J. Cox have accepted invitations to join with the presenters on a roundtable panel moderated by Rosenberg who will then challenge the panel to connect these career stories to contemporary experiences in the fleet today and how these perspectives can enlighten naval leadership in the 21st century.