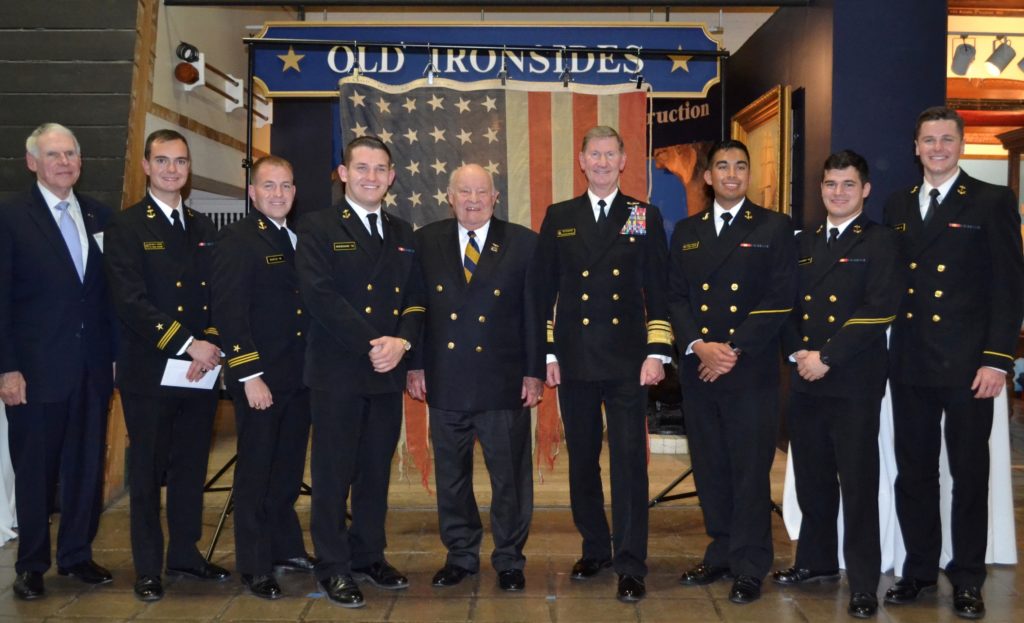 In 2017, Dr. J. Phillip “Jack” London ’59, Executive Chairman and Chairman of the Board of CACI International, had an idea. Inspired by his longtime interest in leadership and character, he would create an award for Midshipmen that would promote new naval perspectives, while emphasizing  American maritime history. Dr. London presented his idea to the Naval Historical Foundation and the U.S. Naval Academy, and the Superintendent’s Annual Leadership and Vision Award was born.

Last fall, the Brigade was invited to compete in the first “Voices of Maritime History Competition” for the Superintendent’s Annual Leadership and Vision Award. They would have to find a solution to a present-day challenge based on previous successes (or failures), and then persuade an audience that their analysis and proposed solution was correct. The competition would connect past and present, academic research with practical application, and vision with leadership.

Knowing that participating in the competition would add to Midshipmen’s already heavy workload, Dr. London sweetened the pot. The first-place winner would receive a check for $5000, the second-place winner $2500, and the third-place winner $1500.

In late February, more than 30 submissions were received. A Selection Committee composed of leading naval historians like Norman Polmar and Jim Hornfischer, retired naval officers Scott Mobley (’78) and Sam Cox (’80), and business and civilian community leaders winnowed the candidates down to six finalists. Three were awarded Honorable Mentions. The other three were asked to prepare to present their work. In early March each of the three remaining candidates made their presentations in front of the Selection Committee. Candidates were evaluated on their ability to inspire, advocate, and educate. The committee was impressed by the candidates speaking abilities, innovative solutions and recommendations. 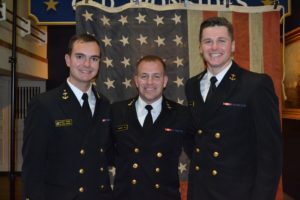 On March 27, the Naval Historical Foundation hosted the Superintendent’s Annual Leadership and Vision Award reception and dinner at the National Museum of the United States Navy at the Washington Navy Yard. Speakers included Dr. London and Vice Admiral Ted Carter, the current Superintendent. The six Midshipmen semifinalists were recognized for their contributions to naval scholarship. The winner, Midshipman William A. Moore, gave his presentation on Privateering in Cyberspace to an attentive and appreciative audience. Moore cited historical examples of privateering dating back to the Illyrian Wars, the American Revolution, and the War of 1812. While acknowledging the parallels between those holding letters of marque in the past and the hackers of today, Moore determined that the lessons of history cannot always be directly applied to the domain of cyberwarfare. Ultimately, Moore concluded that while privateers had been valuable to commanders in the past, he would not recommend utilizing private hackers in cyberwarfare today.

The evening was a great success, bringing together supporters of the Academy and naval scholarship.  Looking back on how his idea for the award had come to fruition, Dr. London noted that “addressing our Nation’s maritime challenges takes vision, leadership, and ingenuity. However, we must also draw upon our vast naval history for inspiration and insight. I’m proud of all the Midshipmen who took part in the competition and look forward to seeing what our next generation of naval leaders will present in the years to come.”