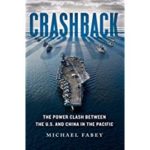 Crashback: The Power Clash Between the U.S. and China in the Pacific

Reviewed by Diana B. West

Crashback was written for the benefit of journalists, business people, or anyone who wants to understand the recent military confrontations in the South China Sea and why they should be concerned about it. The focus of the book is on the role of the U.S. Navy in securing freedom of navigation for ships through the international waters of the western Pacific, and the challenges it has faced from the newly empowered – and newly aggressive – Chinese navy while doing so.

As the former naval editor of Aviation Week, Fabey has had years of direct access to Navy personnel from upper to lower ranks, the ships they sail, the aircraft they fly, and better access to the Chinese equivalent than most other contemporary writers. He knows whereof he speaks. After describing several military confrontations, giving a short history of the recent Chinese naval buildup from nearly nothing in the Nineties to the rival force it is today, and detailing the American ships and naval leaders who have been most closely involved in the issue in recent years, Fabey criticizes the cautious approach of the Obama administration and the naval leaders who agreed with it.

Fabey identifies the Taiwan Strait Crisis of 1995-96 incident as the starting point of the current conflict, when China began “testing” missiles by lobbing them across the strait. This not only threatened the Taiwanese, but effectively shut the strait to all shipping and air traffic. The United States demanded that China cease immediately and sent two carrier battle groups to the underline their point. China had to capitulate, but the humiliation was intolerable. Shortly thereafter, China began building a new navy and soon became increasingly belligerent about its territorial rights in the area. Since the early 2000’s, they have committed numerous aggressive acts designed to challenge American military dominance of the area and establish China the leading power instead. Chronicling these acts and the circumstances surrounding them make up the bulk of the book.

The crashback event cited in the title is, for Fabey, the perfect example of how not to handle China. In this incident, the captain of the cruiser USS Cowpens ordered a crashback (the naval equivalent of throwing a semi-truck from drive into reverse) in order to avoid hitting a small Chinese amphibious vessel that had deliberately placed itself in front of the ship to force a confrontation. Given both the risk assessments and the captain’s orders to maintain a “de-escalatory posture,” he had little choice in the matter if he wanted to avoid Chinese casualties. The argument of the book, however, is that the Chinese see such actions as American weakness, proof of our unwillingness to engage, and evidence that they can continue their aggressive actions against foreign ships in the South China Sea.

Fabey would prefer a much harder line be taken. Oddly, he makes this argument more clearly in the prologue of the book than at the conclusion, stating that the United States must “require China to respect and maintain the status quo,” a position the Fabey admits is hardly a stirring cause. In his opinion, however, it is both the most practical approach and the best possible outcome for everyone else in the world.

Fabey knows his subject and the principal military figures involved very well. He never assumes more than a general literacy on the topic from his readers, however, explaining all acronyms, naval norms, and backstories both recent and ancient to ensure that his readers will understand not only what happened, but why. Fabey describes encounters between American and Chinese forces in language that is vivid and clear, making it easy for the lay reader to picture the events and the people involved.

This is not a book for naval experts or specialists in Chinese-American relations, but for those whose jobs or interests compel them to understand why tensions are so high between the two countries over navigation through these waters and how serious the situation is. Make no mistake – the U.S. and China are engaged in a warm war. Handling this issue inappropriately could lead to a hot war with a China that is much more belligerent and far better armed than at any time in recent memory, and that is why the lay reader should be deeply concerned indeed.

Diana B. West is the current Director of Communications and Social Media at the Naval Historical Foundation. She was formerly the feature writer at Navy magazine.