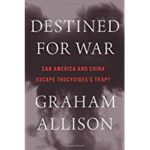 Destined for War: Can America and China Escape Thucydides’s Trap?

Looking Back to Find a Way Forward

Thucydides concluded that the underlying reason for war between Athens and Sparta, a war that neither side wanted, was the rise of Athens and the fear it instilled in Sparta. Taking his cue from Thucydides, Graham Allison, in Destined for War: Can America and China Escape Thucydides’s Trap? examines the rapid growth of China and what that could mean for the United States. Using the metaphor “Thucydides’s Trap” to describe the tensions between rising and ruling powers and whether they are able to work out the differences between them, Allison identifies sixteen “Thucydides’s Trap” moments in history and wonders if Chinese and American leaders can learn from them and avoid conflict as China continues to rise and tensions increasingly irritate relations between China and the United States.

China has experienced major economic and social change in the last thirty years. The Chinese economy has greatly expanded and currently has a growth rate three times that of the United States.  In 2014 the International Monetary Fund (IMF) estimated the size of China’s economy had grown to $17.6 trillion and overtaken that of the United States at $17.4 trillion. Moreover, the IMF expects the Chinese economy to continue growing and projects it to be 20% larger than the US economy by 2019.   At the same time, the Chinese have witnessed dramatic improvements in construction, transportation, and overall quality of life. Per capita income has risen from $193 in 1980 to more than $8,100 today. Life expectancy in China is now seventy-six compared to just thirty-six in 1949, and, in the same span of time, literacy has risen from around twenty percent to ninety-five percent. China has become a global competitor in education, science, technology, and innovation. Tsinghua University is now the highest-rated university in the world for engineering.  China leads the world in the production of computers, semiconductors, and communications equipment. At its current rate of advance, China will surpass the US and become the world leader in research-and-development spending by 2019. Roads now connect ninety-five percent of the country, and China has shown it can construct major bridges in a matter of days and skyscrapers in a matter of weeks. In the last decade it has constructed 12,000 miles of high speed rail and plans to build another 16,000 miles by 2029.  Allison points out that these investments in infrastructure and human capital are not only major contributing factors in China’s resurgence but also a precursor to achieving the goal of a Sino-Centric trading network by land and sea via Xi Jinping’s One Belt, One Road, (OBOR) initiative.

China’s growing power and influence has reinforced its determination not to be contained or humiliated again. During the 1996 Taiwan Strait Crisis, China

backed down from confrontation with the United States because it could not compete with US naval power. Allison believes China’s inability to defend its interests then is the catalyst behind its military spending and aggressive territorial claims now.  Xi Jinping’s plans include being able to match US naval power in the region so that he can more forcefully defend China’s interests. China’s defense budget currently ranks second to that of the US but is double that of Russia’s.  His military assets now include more than a thousand anti-ship missiles on Chinese shores, sixty-two submarines, including six new nuclear-powered attack submarines (SSNs) and four new ballistic missile submarines (SLBMs), and an expanding surface combatant fleet, including one operational carrier expected to enter service in the early 2020s and more on the way. According to Allison, China is also upgrading its intelligence, surveillance, and reconnaissance capabilities. Its antisatellite weapons are already capable of jamming or destroying US intelligence, surveillance, and communication satellites over its territory.[1] China has challenged longstanding international protocol regarding disputed territory in the South China Sea by occupying islands claimed by its neighbors. In the Spratly Islands, China has established ports, built airstrips and radar posts, and erected missile launchers. Xi Jinping is developing a forward defense strategy of controlling nearby waters, including most of the South China Sea, with the intent being denial of access to what China sees as its territorial waters at some point in the future.

The US views China’s occupation of disputed islands and reefs as a way to bolster its claim to most of the South China Sea and its militarization of them as a way to monitor the region and control its waterways.  With the US recognizing only the twelve mile limit for territorial waters and periodically challenging access to the region with freedom of navigation operations, there is uneasiness that an incident is just one miscalculation away from reality. Allison provides a number of scenarios where unintended consequences could escalate into full-blown military conflict, despite the fact that neither China nor the US wants war. To alleviate that potential, Allison believes the past can illuminate national policy through the analysis of historical precedents and analogues.  Of the sixteen case studies from history that produced a “Thucydides’s Trap” moment, Allison states that in only twenty-five percent of them was conflict averted.  These cases are instructive, he asserts, because they offer evidence that war is not inevitable. Still, an energized nation of 1.4 billion people with a rapidly expanding economy and military must be taken seriously. Besides freedom of navigation through the South China Sea, other tensions between the United States and China include trade, intellectual property rights, and cybersecurity, all of which could negatively impact interactions between our two countries. Although he makes no predictions as to what the future holds for US-China relations, Allison does see current US policy towards China as flawed, in need of careful thought and reflection, and asks whether we are really willing to risk nuclear war to maintain freedom of passage in international waters on the other side of the world? If so, war sometime in the future is not merely possible but much more likely. Allison believes the US can safely adapt to China’s rise by identifying our vital interests and learning from “Thucydides’s Trap” moments in the past.  The way forward without war may be dependent upon it.

Randall Fortson received his M.A. in history from the University of Georgia in 1994 and is currently a historian with the Naval History and Heritage Command in Washington, DC.