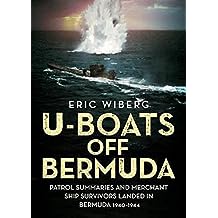 Eric Wiberg’s U-Boats Off Bermuda recounts a story of the western side of the War in the Atlantic.  With much of the scholarship focused on the combatants, and popular memory influenced by films like Das Boot, Wiberg’s survey helps flesh out the civilian mariners of the approximately 80 ships sunk in Bermuda’s waters during World War II. Wiberg succeeds in achieving his stated goal: to inform and “perhaps inspire empathy not only for the mostly civilian victims of Axis submarine attack, but also for the indubitably brave Axis submariners who were attacked with increasing and fatal ferocity towards the end of the war” (16). U-Boats Off Bermuda is the first comprehensive work on the subject and belongs on the shelves of naval historians looking at the Second World War in the Atlantic.

The book is organized chronologically, with each period of time prefaced with a chapter detailing Axis submarine actions. Subsequent chapters address the fates of individual merchant ships, their crews, and passengers. The lengthiest section of the book, understandably, covers what U-Boat crews called the “Second Happy Time,” from January to approximately August 1942, including Operations Paukenschlag (Drumbeat) and Neuland (New Land). Globally, the Second Happy Time accounted for approximately one quarter of all wartime Allied shipping losses. Sinkings in Bermudian waters were equally high, though not without some measure of revenge as U-158 was sunk at the end of June by U.S. aircraft.

The book’s strength is in relating the human story of the crews.  Using sources from a variety of archives and museums, Wiberg recounts the incredible tales of survival for many of these passengers and crew. The story of Captain David S. Davies of the S.S. Margaret is reflective of the personal nature of U-Boats Off Bermuda’s narrative.  After being sunk by U-66 in 1943, Davies later recounted that “it was with a very deep feeling of regret and almost guilt that I left the St. Margaret.  The impression came over me that I was deserting her in her time of trial….[she] appeared very proud and defiant, although mortally injured.”  (p. 208).

Survivors often spent days or weeks adrift at sea before being rescued.  In the case of the S.S. Empire Dryden, some survivors drifted over 630 miles from where they were sunk to where they were rescued, 16 days later.  Those survivors were the lucky part of the Empire Dryden’s crew, however, as another lifeboat separated during a storm and was never seen again. Wiberg recounts the survivors’ stories well, using often conflicting primary sources, which he untangles for the reader in order to create a cohesive narrative.  The hospitality of the islanders toward the survivors is also well described.

The book has several minor areas for improvement. First, it lacks adequate maps to detail the often complex maneuvers of the U-Boats and passenger ships.  The one map contained in the book provides an overview of the 80 Allied merchant ships sunk between January 24, 1942 and  February 27, 1943, but is in too small a scale to be useful when attempting to plot U-Boat courses. Each chapter on the U-Boats should have included a map depicting sailings and sinkings in order to clearly define the U-Boat patterns.

Secondly, the opening of each chapter on Allied ships contains several paragraphs of basic statistics of each merchant ship (ownership, manufacture information, registered tonnage, etc.).  These introductory paragraphs are rather dry and could be better presented in table or chart form without sacrificing accuracy or making the book look like an extended Wikipedia entry.  This would free up text space to be used for telling the human stories in more depth.

Wiberg successfully tells the engaging story of the oft-overlooked merchant crews who were a crucial part of the Battle of the Atlantic. His writing informs and, as he attempted to do, inspires empathy in the reader for the officers, sailors, and passengers aboard the U-Boat victims as well as with the U-Boat crews themselves. As the first comprehensive book on the subject, Wiberg has opened a new chapter in scholarship while allowing others to follow and flesh out other stories of Bermuda’s small but important role during World War II.

Timothy Heck is a graduate student at Kings’ College, London, in the Department of War Studies.  He is an artillery officer by training.  He can be found at twitter.com/tgheck1