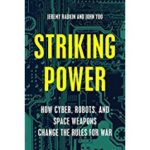 Striking Power: How Cyber, Robots, and Space Weapons Change the Rules of Law

Striking Power: How Cyber, Robots, and Space Weapons Change the Rules of Law is a thought-provoking and disturbing book. It fits well into the manner of Peter Singer’s, Noah Shachtman’s and Thomas Rid’s writings and postings on new weapons technology. Where the other authors raise ethical questions about their use, Jeremy Rabkin and John Yoo grind the questions down to what may be considered legally acceptable under agreed-upon definitions [the United States, France, Britain, Russia and China] of international law.

One of the best ways to understand the arguments that Rabkin and Yoo are making about the legal justifications for the use of cyber, robots and space weapons is to go back well into the 19th century to the nasty, years-long guerrilla fighting of the second Seminole War when the Florida tribe refused to be sent forever into “Indian Territory” in Oklahoma.

Gabriel Rains, a junior captain and a Military Academy graduate, was determined to stop the Seminole attacks on his small Florida fort in 1839 and bring the tribe to heel in his area of operations. Rains decided to bury an explosive and hide it under a blanket near a watering hole used by the Seminoles. Stories vary about whether the first buried explosive was successful or a bust, but what became clear in that war, especially to the soldiers ordered by Rains to try again to wreak havoc upon the unsuspecting, was that the risk to them from premature explosions was as great or greater than the risk to their enemies. The soldiers learned quickly that they might accidentally trigger the explosives or the charge was too volatile, exploding prematurely maiming or killing the handlers.

Years later, as a senior Confederate officer, Rains planted land mines, actually booby traps, in abandoned fortifications at Yorktown, and buried four artillery shells with triggers along  the roads in and out of Williamsburg to slow down advancing Union cavalry as his regiment and others fell back on Richmond in 1862. No one had explicitly ordered him to do these things, but then again no one had explicitly ordered him not to. Confederate general officers, like James Longstreet and Joseph Johnston, approved “torpedoes” in naval warfare, but were appalled that “weapons that wait” would be used on land. On the other hand, the “fighting bishop,” Leonidas Polk, a West Point graduate, had no such scruples and wanted as many mines as his army in Kentucky and Tennessee along the Mississippi River could get, and an instructor on how to deploy them, especially on land. It took two Confederate secretaries of war to calm the bickering generals down and write the rules of engagement for their use, one that became more permissive as Confederate chances of victory were slipping away.

In a very modern way, Rabkin and Yoo are doing much the same thing for 21st century weapons and in new domains. Torpedoes then on land and water and cyber now “does not fit cleanly into the models governing land, sea or air.”  Nevertheless, this domain, however, it is defined and space are clearly written into national security and defense strategies of the United States, Russia and China—at least.

One of the underlying premises of Striking Power is that the genie is already out of the bottle in  many areas, so it’s not how we try to capture it, but how we harness these weapons’ technologies in domains to minimize damage and civilian casualties and deter larger devastating conflicts.

For example in the case of cyber, they write: “The great powers would want to be very cautious about launching a cyber attack on the military computer networks of a hostile state, for fear that it would be seen as a prelude to a broad-based conventional or even nuclear attack.”

To this reviewer, that reads like Mutual Assured Destruction theory in explaining how to deter nuclear war. It worked in the past, the authors know, but whether it will work in the future is anyone’s guess.

In the future of space as a military domain, the authors call for an anti-ballistic missile capability to prevent smaller nations [North Korea now and maybe Iran in less than a decade] from threatening nuclear war.  On paper, that certainly seems like a wise idea, but the reality is far more complicated and far more unsure. The most recent test of the “bullet shooting down the bullet” defense was a failure, and that defense was specifically aimed to deter a “smaller nation.”  With billions already spent on missile defense and more pledged to the program, the fear is that United States may simply be throwing money at the threat.

The second prong in space is developing anti-satellite weapons, an arena that has received steady Kremlin investment and now keen Beijing interest. The authors correctly note, as they did in a number of other places, on anti-satellite weapons, that genie is not getting back in anyone’s bottle.  They write, “Even if it were possible to verify an anti-ASAT agreement, it would not be in the national interest of the United States or other great powers to sign it.”

These weapons “provide nations with a precise means of using force in a dispute that has little chance of civilian death. It provides a measured form of coercion that can induce nations to settle their disputes before they reach higher levels of destruction.”

That might be wishful thinking in times of crisis, but Rabkin and Yoo are definitely stimulating thinking about serious questions.

This reviewer believes Rains best captured the moral dilemma of new technology in warfare and should be factored into thinking about what each acceptance means. “Each new invention of war has been assailed and denounced as barbarous and anti-Christian,” playing to a Victorian audience. Adding a note applicable to today’s readers in a more secular age, “Yet each in its turn notwithstanding has taken its position by the universal consent of nations according to its efficiency in human slaughter.”

That is an extremely sobering thought to hold onto in reading Striking Power.

Rabkin and Yoo are arguing that the very precision of robotics, cyber and space weapons in a chaotic world “may allow nation to coerce others to stop these greater threats [weapons of mass destruction] more effectively,” a very large idea that could be blown apart if a terrorist organization gains control of chemical, nuclear, biological or radiological materials to make weapons for themselves.

Then, the question of “rules of war” is overcome by events.

John Grady is a noted journalist on military/naval affairs.

Buy the book on Amazon