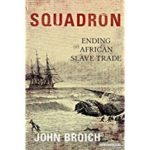 When asked about the history of the slave trade, without hesitation most people will discuss slavery in the United States prior to 1865.  Few will talk about the slave business in East Africa, Zanzibar, Oman, India, and the West Indian Ocean. In Squadron, John Broich well explains the successful impact that the Royal Navy played in the abolition of the business in just those regions.  He focuses on four men: Captain Leopold Heath and Commanders Philip Colomb, Edward Meara, and George Sulivan.  While thoroughly detailing the efforts of the men to stop the trade of East Africans, he also provides descriptions of the vessels used in the push to end the region’s slave trade and givese insights into the personalities of the men in charge.  While not providing traditional endnotes, Broich’s use of explanatory notes gives ample evidence of the excellent archival materials and primary sources he used.  The book contains illustrations, maps, and glossaries of important people and Royal Navy ranks.

The officers of the squadron came well versed in naval conflicts and experiences, having seen action in Crimea, China, and the Arctic, as well as in the Indian Ocean.  Each of the vessels had a group of Kroomen from Liberia who helped free the East Africans from their captors and who worked well with the British crews.  Three of the vessels in the squadron were of the Amazon class and originally had been designed to match the power of the Confederate ship Alabama that had been built in Great Britain in 1862.  The Amazons had no armor and only four guns on carriages set on tracks to pivot them as needed.

The mission of Heath’s squadron was to stop or at least reduce the number of East Africans being trafficked to Zanzibar, Oman, and other places surrounding the Indian Ocean.  While not receiving direct orders to end the slave trade, Captain Heath interpreted his orders and decided that part of the Royal Navy’s role was to end the traffic.  He relied on his interpretation of the 1833 British law that banned slavery in the empire.  Approximately twenty thousand East Africans were trafficked annually in the region with Zanzibar serving as a major point of transfer of the slaves.  Slaves were used in the production of sugar, dates, and cloves and the collection of ivory, pearls, and copal, a resin used to make varnish.

To capture the slave traders and free the slaves, Heath designed a plan similar to that of a spider’s web with his men’s vessels serving as the spiders waiting for prey to come into the web.  The Amazons waited for the monsoons that pushed the dhows north, but once spotted, the dhows could not escape the Amazons who lay hidden by rock formations on the various islands.  The plan lasted about eighteen months and freed over one thousand slaves.

Despite the success of Heath’s squadron in freeing slaves and burning the slave-carrying dhows, the four commanders often received complaints from the Sultans in the region saying that the Navy was removing people who were not bound for the slave market but were instead privately-owned slaves being transported to other regions for their owners.

With the spider web’s continued success, problems grew for Captain Heath. The slave trade was integral to the economic network of the East African region and Heath’s success started to hurt the economy of the region.  The British government soon worried about its economy and feared that the region’s leaders would change their alliances to the French or Portuguese who more willingly accepted slavery.  Because of the British fear of losing allies and profits, the government warned Heath and his men to gather evidence proving that the Africans that they freed were actually bound for slave markets and were not the property of others on board the dhows.

The spider web had proven too successful and some British authorities even said that the captains were too zealous in capturing the slave dhows.  Heath and his three commanders received orders to return to Great Britain and await further orders.  While there, they learned that their efforts in East Africa had been followed by the British press and were having an impact with the abolitionist societies there.  While at home, Philip Colomb and George Sulivan wrote books about their time in the Indian Ocean.  The publicity that the books received enhanced the abolitionists’ cause, who soon demanded that the British government change their policies and treaties to end the slave trade.  The demands worked, and within three years the British government obtained new treaties with the slave-holding areas that said they would stop the slave trade and even abolish it.  By 1897, the slave trade in the region had come to an end in large part because of the actions of Heath, Colomb, Sulivan, and Meara. Squadron successfully demonstrates that military strategy and diplomacy work together and are vital to international relations.

Dr. Ahmad teaches at the Missouri University of Science and Technology in Rolla, Mo.