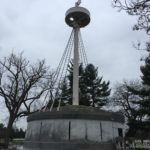 For over a hundred years, the main mast of the USS Maine stood sentry at Arlington Cemetery over the remains of 229 Sailors. Over time, the weather took its toll and the memorial deteriorated, so after extensive research and preparation the mast was taken down in 2014 for repair and restoration. The memorial beneath the mast underwent significant restoration as well. Now finished, the mast was put back in place and rededicated in a ceremony February 21, 2018.

While many people may recall the phrase, “Remember the Maine!” fewer people remember what it refers to. The phrase comes from newspaper headlines that led to the beginning of the Spanish-American War.

The late 1890’s was a period of “yellow journalism,” a time when competition between rival newspaper chains led to sensational reporting, lurid headlines, and a casual approach to the truth. Knowing that nothing sold newspapers better than a war, newspaper mogul William Randolph Hearst sent Frederic Remington, artist and reporter, to Havana with orders to report on the war in Cuba and its atrocities.

The Cuban War of Independence (1895 – 1898), was the third and last of a series of wars that took place as native Cubans struggled to overthrow their Spanish rulers and the Spanish tried to hang on to their last colony in the Americas. Since the early 1880’s, Spain had also been suppressing an independence movement in the Philippines. Both revolts dragged on without decisive victories for either side.

Remington sent a telegram back to Hearst reporting that there were no atrocities and no war, so he was coming home. Hearst famously wired back, “You furnish the pictures and I’ll furnish the war.” Not long after, at 9:40 p.m. on the 15th of February, 1898, the USS Maine, docked in the Havana harbor during a courtesy visit, mysteriously exploded, killing 253 instantly and 7 more who died of their injuries in the following days.

Hearst newspapers demanded an immediate declaration of war against Spain under headlines that screamed, “Remember the Maine!” After a few weeks of handwringing, President McKinley declared war.

The Spanish-American War lasted only a few months. The United States sent new American warships down to the Caribbean where they crushed the meager Spanish fleet. The Battle of Santiago Bay on July 3rd dealt the final blow, and Santiago’s surrender on the 17th marked the end of the Spanish Empire in the Americas.

Meanwhile, the American fleet in the Pacific battled the tattered Spanish fleet based in the Philippines. Commodore George Dewey made quick work of the conflict and seized Manila as the spoils of war. When the peace treaty between the United States and Spain was subsequently signed, Spain granted Cuba independence, but signed over its colonies in Puerto Rico, Guam, and the Philippines to the United States.

On the whole, the war did not reflect well on the United States. There was no evidence that Spain had caused the explosion of the Maine, after all, and the acquisition of so much territory led to accusations of American imperialism. The U.S. did give Spain a modest cash payment for the territories, but the suspicious circumstances combined with the acquisition of the new colonies led to a great deal of criticism.

After the war, in late 1899, the remains of 165 Sailors killed in the explosion were disinterred in Cuba, brought to the United States, and reburied in Section 24 of Arlington Cemetery. It is a beautiful location and close to the amphitheater and several other memorials of significance.

In 1900, Congress passed a bill authorizing the raising of the Maine from the bottom of Havana Harbor, recovering the remaining bodies, and removing the mast so that it could be placed in the cemetery as a memorial. It took two years to raise the Maine, but after it was accomplished, 66 more bodies were recovered. One body was identified and returned to relatives for burial, the other 65 were interred next to their shipmates in Arlington. The foremast was also removed and sent to Annapolis, where it is part of a memorial at the U. S. Naval Academy. What was left of the ship was towed out to sea and scuttled with full honors.

Today, the main mast of the USS Maine stands guard over the remains of 229 American seamen, 167 unknown, who died because of the explosion. The cause may have been dubious, but the sacrifice was not. The rededication of the Maine‘s mast serves as a reminder that the true cost of wars, no matter the purpose, is in the lives of those who fight them. 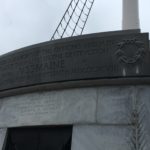 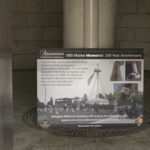 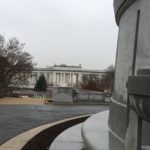 Basic information about the memorial and the Spanish-American War can be found here.

For more detailed information about the memorial and its restoration see this brochure.

A livestream of the event was recorded by the staff at Arlington Cemetery, who also created a wonderful video about the decade-long restoration process. They also put a lot of great photos up on Flickr.