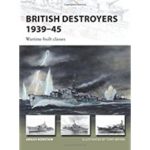 Angus Konstam, a naval historian and a prolific Osprey titles author, pens his second in the British destroyer series which follows up the earlier British Destroyers 1939-45: Pre-war Classes (New Vanguard #246). This work concludes the destroyer saga profiling the ten remaining classes which entered service for the Royal Navy during World War II.

The 48-page format of the Osprey New Vanguard series does not lend themselves toward a detailed discussion of the many destroyer classes from the Tribal to the Battle-class produced in the British shipyards, but they do provide a proven formula for a good overview which should appeal to the casual reader and grognard alike. Fortunately, the book contains a number of color plates, such as the detailed cutaway image of HMS Eskimo on pages 10-11 which helps to detail many aspects of the vessel, in particular the below deck spaces which escape normal consideration while also illustrating how the British managed the challenge all destroyers faced of efficient use of space and weight to achieve better speed. This continues the first book’s cutaway of the HMS Greyhound, a welcome continuation of the same useful graphics.

The book initially deals with broad aspects such as design, and function (i.e. role, weaponry and sensors) until eventually reaching the coverage of the ten classes profiled and their relative modifications. Finally the book ends with a combat example, which helps to show the ability of the wartime destroyer classes in a short, compact narrative backed up with primary source accounts.

Since the British were concerned about the gun heavy Japanese Fubuki class even before the 1930s, the future would necessitate a heavier gun destroyer to meet the growing threat, yet the 4.7” gun remained in service which was described on page 13 “the equivalent of similar 5inch guns in other navies”.

A brief, yet thorough discussion of the different sensors on pages 14-15 shows the evolving use of different radar sets, HF/DF, IFF and other systems which allowed these destroyer classes better combat ability through improved means of detection while also showing how the Operations Room grew in importance as a way to control battle instead of at the bridge.

Pages 44-47 document the combat experience of HMS Saumarez (G12) in the May 1945 action against the Japanese heavy cruiser Haguro and destroyer Kamikaze in the Battle of the Malacca Strait. Konstam’s account includes liberal doses of eyewitnesses, such as Captain Power and Lieutenant Calnan who describe the fighting in which the five destroyers led by Power eventually sank the Haguro making effective use of their radar, fire control and crew experience to defeat the ostensibly more powerful enemy.

The most obvious criticism of such a short title is the lack of space for detailing the careers of the 180+ ships which are discussed in a number of tables within the work. In lieu of detailing when space does not allow, Konstam provides the 1945 Malacca Strait example which is meant to act as a useful example of the British late-war destroyer actions in which the wartime developments could be showcased. Due to space limitations, Konstam does not develop the loss of the individual ships beyond a notation such as the case of S&T class HMS Swift (G46) listed as “sunk off Normandy, 24 June 1944” [page 34] without further indication of the specifics of the event. The reader might be interested to learn the actual reason for the loss was, which according to one source the HMS Swift sank due to enemy mines near Ouistreham, which cost 17 of the crew.[1] Again the book does not attempt to fill in the blank, which is typical for the brevity of the New Vanguard series.

In conclusion, Konstam’s follow on to British Destroyers 1939-45: Pre-war Classes remains an important introductory look at the topic, well-illustrated and supported by photos. It provides a brief discussion of each class with a brief sketch as to the fate of the vessel, which itself is quote useful in demonstrating how much of the Royal Navy’s burden the destroyers carried, many of which were lost in the service of the Crown.  While not intended for anything beyond a good introduction, Konstam again succeeds in delivering a thorough discussion of the remaining destroyer classes while also outlining some of the design changes and other improvements as each class was built. While the book may not meet the needs for detailed research, it is more than ample for the cursory reader or hobbyist who seeks images, especially color plates, which show the camouflage patterns or other details not obvious in black and white images.