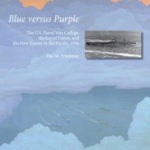 Blue versus Purple: The U.S. Naval War College, the Soviet Union, and the New Enemy in the Pacific, 1946.

Hal Friedman likes trilogies.[1] His first three books (the American Lake series) examined the strategic, political, and administrative history of American, especially U.S. Navy, involvement in the Pacific in the aftermath of World War II. His second trilogy (of which this volume is the third) analyzes the U.S. Naval War College at Newport in the same era, 1945-1947. In contrast to World War II, the U.S. Navy’s immediate postwar years have received far less attention from scholars. Thus Friedman’s body of work illuminates a less well understood period of American naval history.

Blue versus Purple focuses on war gaming at the War College in 1946 as the Soviet Union replaced a potentially resurgent Japan as the most likely opponent for the U.S. Navy. As a result, the war games during the year dealt with potential operations in the North Pacific such as a possible amphibious assault on the Aleutian Islands. The book begins with a survey of the mechanics of the gaming system in use at the time and procedures the students followed in such games. Friedman then turns to four specific games (“operations problems” in the school’s parlance) and delves into the details of how each side prepared their estimate of the situation and how the game proceeded. The chapters that examine these operations problems provide hitherto unpublished detail on the process and mechanics of war gaming. While the reader may wish for more information on the outcome of the problems, Friedman notes that the purpose of the problems was to practice decision making under pressure, not to carry the game to its conclusion.

Blue versus Purple highlights the considerable continuity in the War College curriculum. The scenarios for the operations problems reflected both interwar doctrine and wartime experience. Specifically, the heavy focus on surface warfare stemmed from the Navy’s experience in 1942 when American aircraft carriers were scarce due to losses and wartime damage. Furthermore, operations against the Soviet Union in northern waters would place American formations in the midst of some of the worst weather at sea in the world. Such conditions frequently precluded carrier flight operations, as survivors of the Murmansk Russian convoys could testify. One of the Royal Navy’s critiques of World War II American naval aviation was that operations in the Central Pacific gave the U.S. Navy an overly rosy view of the utility of carrier aviation in all weather conditions. Friedman shows that the War College’s faculty recognized that naval warfare in the Arctic could be quite different from the sunny South Pacific.

Friedman’s writing style is engaging and the text is illuminated with a variety of photographs of students and school materials from the period. This book is recommended for specialists and those with an interest in the early Cold War U.S. Navy.