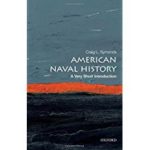 Craig L. Symonds delivers a fast-paced narrative covering the history of change and advancements in the United States Navy. American Naval History: A Very Short Introduction gives the reader a broad overview of the United States Navy’s history in compact form from the American Revolution through the present day Navy. Symonds recreates the history from a myriad of sources to tell a concise story that includes key events and important naval leaders like John Paul Jones, Matthew C. Perry, and Chester Nimitz, depicting how they contributed to the success of building the United States Navy.

Symonds classifies each major period by the composition of the vessel. The age of sail covers naval activity from the American Revolution through the start of the Civil War, while steam and iron covers the time from the Civil War through the introduction of the Carrier Warfare used in the present day navy. Each of these periods were full of their own setbacks and advancements, each leaving their own mark on history. The common theme for each of these periods is that a strong navy will win wars and conflicts, but maintaining a strong navy during times of peace is a difficult undertaking for any president to sell to Congress.

Since the American Revolution, great American military leaders have determined the need for a strong and dependable navy. George Washington knew, for example, that in order to defeat the King’s forces, he needed to disrupt the British supply line. The militia-type navy of privateers defined the navy of the Revolutionary War, but future conflicts and wars would demand the United States make advances in naval technology and naval warfare. The successful progress of the United States Navy would require the innovative thinking and vision of presidents such as Thomas Jefferson, Theodore Roosevelt, Franklin D. Roosevelt, and Ronald Reagan.

The history of the United States Navy could not be complete without the mention of cultural and social issues of the times. Included in this brief narrative is an outline of the social changes that propelled the Navy to success. During the American Revolution, freed slaves are taken aboard ships and added to the ships’ rosters, while during World War II, women served in the Navy through a program known as Women Accepted for Volunteer Emergency Service (WAVES). In the 21st Century, women serve on combat ships in the Navy and as infantry officers in the U.S. Marine Corps.