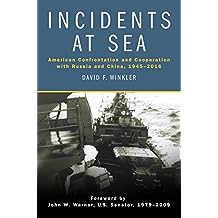 Incidents at Sea: American Confrontations and Cooperation with Russia and China 1945-2016

The Cold War was exceptionally “cold” on land, as there were very few confrontations between Soviet and American ground forces along the land border between NATO and the Warsaw Pact. At sea, however, the Cold War was a hot war, with both the American and Soviet Navies challenging the other frequently. Between 1945 and 1972, warships and planes of the United States and the Soviet Union often operated in an adversarial manner toward each other. These confrontations often led to collisions at sea and destruction of aircraft in the skies.

The author lists some 250 adversarial encounters between United States aircraft and warships and Soviet or Soviet cliental aircraft and warships during this period. Over time, a fear developed at the national level that these incidents at sea could escalate to become a flash point for war. Moscow and Washington thus decided that it would be beneficial for both sides to develop a set of rules that all could agree to, concerning gathering naval and military intelligence using sea and air assets.

This fear of an accidental war between the Soviet Union and the United States led to one of the most remarkable documents signed between the two countries during the Cold War — the  1972 Incidents at Sea Agreement. The purpose of this agreement was to reduce the possibility of an armed conflict arising from an incident at sea involving non-hostile interaction between American and Soviet ships, submarines, and aircraft. The Incident at Sea Agreement provided the United States and Soviet navies with a means to communicate their intent of purpose when operating at sea within proximity to each other. The Incident at Sea Agreement also provided a bureaucratic method to resolve what one side or the other considered unsafe provocative actions by the other at sea.

The story of how the Incidents at Sea Agreement (IncSea) with the Soviet Union and later the Military Maritime Consultative Agreement (MMCA) with the People’s Republic of China came into existence is a fascinating story of United States interagency consulting and international diplomacy. The crafting of the IncSea Agreement was a tedious affair, with contradictory wants and needs that each country wished to have spelled out in agreement. Despite flaws, the IncSea Agreement has lessened world tensions. “Lessened” does not mean “eliminated” —  the author lists over 300 reportable incidents since 1972 between the Soviet/Russian and Chinese navies and the United States.

The author presents a fascinating look at the U.S. Navy during the Cold War when its leaders had to be both warriors and diplomats. Those aspiring for command of a ship at sea would do well to read this book to understand the why and how IncSea Agreement and now the MMCA came to be part of current U.S. Navy doctrine.